Jayson Tatum talks about Celtics' offseason during his basketball camp 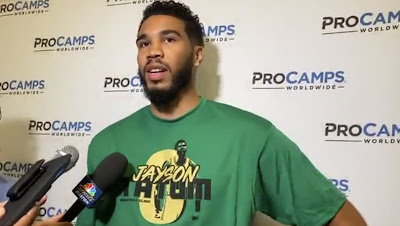 Jayson Tatum has been enjoying his summer so far and with his basketball camp getting underway Saturday in Foxboro, MA, some younger fans got a chance to see their favorite player up close.
While the Celtics All-Star got to play some one-one-one (which meant he could do his best Robert Williams impression, when it came to swatting away shot attempts into the crowd) and take some pictures with excited kids, Tatum also fielded questions with not only the young campers but the media that happened to be present as well.

"I always like doing these camps, just to see the excitement on their faces when I come in," Tatum told reporters. "That's just extremely pure, and it's all about just having fun, and I think that's the best part."

As far as basketball goes, Tatum was asked if he had been in contact with any of his Celtics teammates during the offseason.

"We've all been in contact, just checking in on each other, see how they're doing," Tatum responded. "Everybody is traveling with their family and stuff right now, but probably next month, guys will start getting back in the gym. Some of us might be in L.A. together and we'll work out, stuff like that."

With multiple reports of Jaylen Brown being involved in a possible trade package for Kevin Durant over the past several days, Tatum -- who recently said "I love our team. I love the players we got" -- stressed how important team chemistry is as training camp is just around the corner.

"Chemistry is half the battle. I feel like you can have a great team with great talent, and not necessarily gel together," Tatum explained. "You guys saw we figured it out in January and never looked back."

Tatum also addressed his shoulder injury that he sustained in the Eastern Conference Finals against the Miami Heat, giving an update that should be encouraging for Celtics fans.

"It was a longer season than I had ever played, but the shoulder feels good, I've got enough rest, so my body feels really good," Tatum said, "You know what works for you, what you may need to change, whether it be something in your strength program or your diet, so I think that just going through things and having that experience, you learn from it."

However, Tatum also acknowledged that this offseason has been "a little different" after a deep playoff run that ended with the Celtics coming up two wins shy of an NBA title, but still, the 24-year-old can't wait to get back to playing basketball in the upcoming months.

"Knowing that we got to a certain point and was so close. And we're excited to get back to that, get back to the group," Tatum said. "Because we've got unfinished business."

Despite rumors surrounding a Brown for Durant trade this week, it's a good sign to hear that Tatum is eager to get back to work.
Joel Pavón
Follow @Joe1_CSP