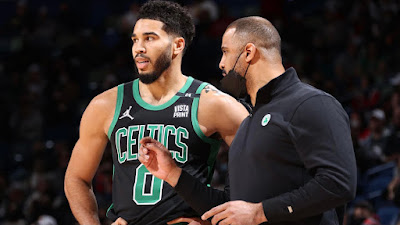 Ime Udoka had a great first year as the Celtics head coach as he could have ever imagined, reaching the NBA Finals before falling to the Golden State Warriors in six games.
One could argue that the biggest reason for the C's historic midseason turnaround is the coaching of Udoka and his roster buying in to his vision on how to play winning basketball. While the team struggled early on, it was Jayson Tatum and Jaylen Brown, among others that showed their support of Udoka even during some low points throughout the 2021-22 campaign.
Still, a run up the East standings to the Conference Finals and to be only two wins away from an NBA championship is nothing short of a successful season. On Friday, Udoka spoke with the media for the first time since Game 6 over a week ago and he shared some encouraging words to Tatum, who's been the subject of criticism over his uneven Finals performance.

"He had a great year -- first-team All-NBA, all the accolades that he accomplished, and obviously he had a huge part in getting us to where we were," Udoka said. "My main message to him was, take a step back and rest your body first and foremost. You had a long season, a long offseason with the Olympics last year, and dove right into it with the season and all the situations we went through like injuries. He was kind of the steady force, didn't miss a lot of time due to injuries or COVID. When guys were out, he had to shoulder a lot of that load.
"Physically get right, mentally take a step back, reflect, and kind of decompress. Get your mind right as well. Just that time away. Don't want to bother guys as much right now, but we want to relay the message that there's still more to build on and grow on in certain areas.
"I think first and foremost, just taking that step away and reflecting on everything when you get back into the gym and take a chance to look at the season as a whole and look at the accomplishments you made personally. For him, he’s a gym rat that wants to get right back into it. Obviously, he has his offseason routine where he takes care of himself extremely well. Get his body right and start building up.

"So from there, we want him to take a step back, rest, and take a look at the big picture and what he accomplished and build on that."

It was a fitting message to end year one in Boston, as Udoka's second season has gotten underway following Thursday's NBA Draft. While there weren't any fireworks, the addition of JD Davison, who was taken with the 53rd pick in the second-round, it's officially the first move of the offseason for the reigning Eastern Conference champs.
Despite Udoka admitting he probably "watched less college basketball than ever this year," he noted how Davison stood out to him even from afar.

"Excited about the young guy. He's a tremendous athlete," Udoka said. "Obviously, with the hair and flying around, he stood out. But he stood out as a player too when I saw Alabama. We'll implement JD into everything we do and looking forward to seeing him in Vegas."

Udoka and the Celtics can now turn their attention to free agency and the trade market, as they look to make improvements with most likely their plethora of trade exceptions, including one TPE worth $17.1 million.

"Obviously, free agency's a huge deal coming up and we've got some needs to address," Udoka said. "For us, consistency across the board, continue to play the way we have -- defensive mindset and also sharing the basketball. And anything we can add, position-wise, to help us with that would be beneficial. For us, consistent scoring off the bench is a huge key. We like to look at certain positions and think we have a lot of things covered but can always have positions [covered]."

"We had some young guys we really relied on, Payton [Pritchard], Derrick [White], Grant [Williams], and those guys grew tremendously throughout the year, and we need to see more of that," Udoka added. "But certain positions and roles need to be touched on and we have a good amount of names that we're looking at and hopefully some of those things work out."

Though Udoka seemed to mention several times that he would like to prioritize internal improvements, especially since all of the Celtics rotation players from their Finals run are under contract for next season, Boston can also use their mid-level exception and veteran minimum to add players via the free agency pool this summer.
Even without the cap space to entice top-tier free agents, Udoka believe the Celtics may be able to reap the rewards of a Finals appearance to attract some key names similar to how the San Antonio Spurs did after their title win in 2014.

"Great players attract others and talk to each other throughout the season and the offseason," Udoka said. "Just watching us on that stage and the growth of our young guys, that’s appealing to other players. When you have guys like Jaylen, Jayson, guys who have a bright future, you start to look at longevity and consistency across the board. That's appealing to other guys."

Udoka also noted that the Celtics could have a departure, as two of his top assistants, Will Hardy and Joe Mazzulla both are candidates for the Utah Jazz head coaching job.
Joel Pavón
Follow @Joe1_CSP