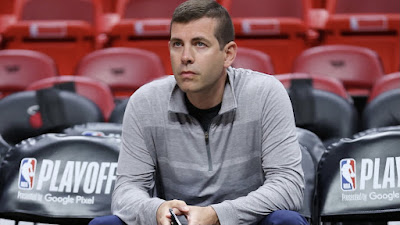 Brad Stevens put a bow on the Celtics 2021-22 campaign Tuesday when he spoke to the media in an end-of the season press conference.
The C's president of basketball operations just completed year one of being in the driver seat which concluded with a trip to the NBA Finals. Following a grueling six games against the Golden State Warriors, Stevens had some simple advice for Jayson Tatum.

"I just told him to go on vacation," said Stevens to the All-Star forward. "'Go get some rest.' This guy gave us everything he had."

Stevens handed the duo of Tatum and Jaylen Brown their props on leading the Celtics through a deep postseason run, despite coming up two-wins short of a championship.

"The way I try to look at it is obviously we're all subjective in every moment and react emotionally but when you start looking at it objectively and more so historically, what Jayson and Jaylen have done in the playoffs, historically at their ages, is rarified air," Stevens explained. "I think we're very cognizant of the fact that even though Jayson would admittedly not have played his best series, there's no chance we're there without him and without all of his great play all the way through.

"I think back to all of the times … Game 6 in Milwaukee was one of the best games I've seen an individual play in my time, certainly in person and with the Celtics," added Stevens. "Without that performance, we would have had this discussion a month and a half ago."

The Celtics finally got over the hump in advancing to the NBA Finals for the first time since 2010. After five trips to the Eastern Conference Finals in a 12-year span -- including four over the past five seasons -- Stevens wants to naturally take that next step in winning the whole thing and hanging banner 18. While he did note that the current roster could benefit from scoring and playmaking off the bench, Stevens also talked about how drastic changes aren't necessarily needed.

"It's not about blindly acquiring talent. It's about fitting a team together," he said. "We did a pretty good job of that this year I think we have an ability to take off running next season, because now we have a foundation and understand who we are as a team."

With the Celtics owning plenty of trade exceptions (such as the $17.1 million TPE created in the sign-and-trade of Evan Fournier, which is set to expire in mid-July if not used prior), Stevens tends to be more realistic when it comes to any potential blockbuster deals some may expect to be made this summer.

"I think the trade exception, there's a reason why a lot of the trade exceptions go unused," Stevens noted. "We have a bunch of them right now. We have one that expires, obviously, the big one expires in July, we've got a couple of others that expire later, they're all reasonable amounts that we can take good players in with, so you balance that on, OK, what's the cost that you're going to have to pay, are you going to bring somebody in that's going to add to -- not necessarily take away, which you obviously don't want to do. So it's still about being prudent and thoughtful about what the deal is."

After being beat by the Warriors, who have now won four championships in the last eight years, a franchise that had roughly a $340 million payroll this past season and have no issues paying the luxury-tax, Stevens says that Wyc Grousbeck and others in the Celtics front office have no fears on spending this offseason, using the team's several trade exceptions or mid-level exceptions.

"We've got the OK to do whatever we need to do," Stevens said. "...So adding people that add to our group is, again, the major focus however we do that."

The Celtics don't own a first-round pick in this week's NBA Draft, but they do have the 53rd pick come the second-round.
Joel Pavón
Follow @Joe1_CSP