Jayson Tatum on Jaylen Brown-for-Kevin Durant trade rumors: 'I love our team. I love the players we got' 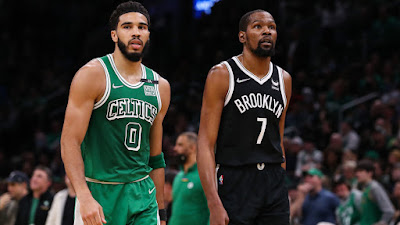 Jayson Tatum spoke about a potential Jaylen Brown-for-Kevin Durant trade following reports from ESPN's Adrian Wojnarowski and The Athletic's Shams Charania Monday morning.
While Brown states he "wants to be in Boston" amid being the center of yet another trade rumor, his All-Star teammate says he "didn't make anything" of the reports that the Celtics were in discussions with the Brooklyn Nets, adding "I just play ball."
Tatum, who attended the premiere of Showtime's documentary Point Gods, which is Durant's latest film, was asked by reporters about the possibility of playing alongside the former league and Finals MVP.

"I've played with him during the Olympics," Tatum said of Durant Tuesday night. "He's a great player. That's not my decision. I love our team. I love the guys that we got. I don't know if that report is true or not."

The 19...rather the 24-year-old forward also responded to what Celtics legend Paul Pierce had to say regarding the trade rumors for Durant. "They not going to do that," Pierce told reporters. That ain't happening. They don't got to make no moves."

"We got two new pieces," Tatum said. "I love our team. I just go out there and play with my teammates. I don't put that hat on to make decisions."

Boston recently added Malcolm Brogdon via a trade with the Indiana Pacers and veteran sharpshooter Danilo Gallinari as a free agent to boost their second unit, making them heavy favorites to not only come out of the Eastern Conference this upcoming season but win an NBA title.
Still, Tatum essentially refused to address that the Celtics reportedly offered Brown, Derrick White and a draft pick for Durant that the Nets rejected.

"I don't believe everything I see on TV," Tatum said of Brown being included in a reported trade package for Durant. "I've seen some shit about me that was a lie.  You never really know what is true and what's not true."

Durant, who has not commented about his reported trade request he made back on June 30, is set to make $44 million during the 2022-23 campaign -- the first of a four-year, $194 million extension -- while Brown has two years remaining on his current deal worth $55.2 million.
Joel Pavón
Follow @Joe1_CSP