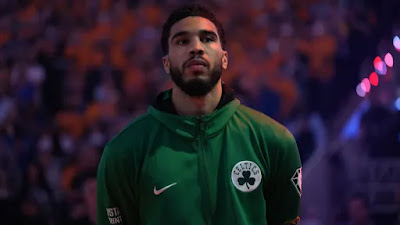 Jayson Tatum spoke to the media for the first time Saturday afternoon since losing to the Golden State Warriors in the NBA Finals.
Despite the Celtics All-Star being seen in the public eye as of late, he admitted how difficult it has been over the past several weeks.

"It takes a long time (to get over an NBA Finals loss), I still think about it every day," Tatum told reporters prior to the Celtics Summer League opener. "It'll probably take until the season starts, or until we get back to the championship again."

Tatum, who came out to Las Vegas to show support to some of his teammates while taken in Boston's 88-78 loss to the Miami Heat, says he remains committed to the Celtics as they try to hang banner 18.

"I'm invested in being with the Celtics. Myself, JB, Smart, whoever it is," Tatum said. "Giving our input on who could help us get over the hump next year."

"It's great, great for our team," Tatum said. "Obviously sad to see your brothers leave, [Daniel] Theis and Aaron [Nesmith], but we got better. Two veteran guys that are proven and ready to help us get to the next level. So I'm excited to have those guys.

"Sent them a text message.. 'Happy to have you. If you need anything, reach out. Looking forward to getting in the gym.'"

The Celtics will look to fill out the rest of their roster before the start of training camp in September.
Joel Pavón
Follow @Joe1_CSP