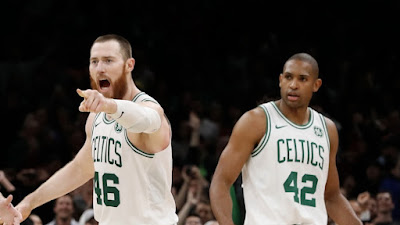 Former Celtics big man Aron Baynes is reportedly working out with NBA teams in Las Vegas, according to ESPN's Brian Windhorst.
It's been a long recovery from a spine injury for the C's fan favorite, which Baynes sustained during the Olympics last summer playing with the Australian National Team.

"Baynes was in hospitals in Tokyo and Brisbane for nearly two months last summer as he learned to walk again," Windhorst wrote. "He returned to playing basketball only in January after grueling weeks regaining his strength through daily physical therapy and is now ready to show teams his progress."

While the Celtics could be in the market to add some frontcourt help after the reported trade of center Daniel Theis as part of the Malcolm Brogdon deal, there is no word if Boston is interested in a reunion with Baynes at this time.
If anyone outside of the Celtics current roster is familiar with Baynes, it's head coach Ime Udoka from the several seasons together in San Antonio.
At age 35 -- one year younger than Al Horford -- and the severity of his injury, many teams including Boston may be wary of taking a chance on Baynes. In any case, Celtics fans know what he's capable of when healthy and whether Baynes ends up back in green or not, it's safe to say we all are pulling for the veteran to make an NBA comeback.
Joel Pavón
Follow @Joe1_CSP