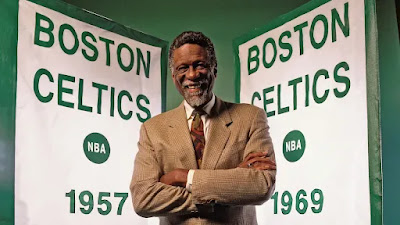 Celtics, basketball, and social justice icon Bill Russell has passed away at the age of 88, his family announced early Sunday afternoon.
Russell, a basketball pioneer that led the Celtics to 11 NBA championships in 13 years during his time in Boston -- the most of any player in league history.

"It is with a very heavy heart we would like to pass along to all of Bill's friends, fans, & followers: Bill Russell, the most prolific winner in American sports history, passed away peacefully today at age 88, with his wife, Jeannine, by his side," read a statement posted on Twitter.

Born on February 12, 1934 in West Monroe, Louisiana, Russell's family moved to Oakland, California when he was eight before his mother passed away four years later. Russell's love of basketball grew by the time he entered high school, as his favorite player was Hall-of-Fame Lakers center George Mikan.
After leading Oakland's McClymonds High School to two state titles, Russell joined the basketball program at the University of San Francisco in 1953. Russell went on to lead the school to two national championships and was named the tournament's Most Outstanding Player Award in 1955.
The following year, Celtics coach Red Auerbach traded his star player Ed Macauley and Cliff Hagan to the St. Louis Hawks for Russell, who was the No. 2 pick in the 1956 draft.
The Celtics had also selected center Tommy Heinsohn and guard K.C. Jones in the same draft, which was the start of one of the most dominating eras in all of sports. Russell helped lead the C's to the franchise's first title as a rookie in 1957.
Russell won his first league Most Valuable Player award in 1958, before the Celtics fell to the Hawks in the NBA Finals. Boston would go on to win the next eight straight titles, with Russell winning four more MVP trophies (1961-63 and 1965) in that stretch. During much of the 1960s Russell and Wilt Chamberlain developed a rivalry, as the Celtics usually won those battles.
In 1966, Auerbach retired after Boston won its eighth consecutive championship and named Russell his successor. He not only became a player-coach, but Russell was the first-ever black head coach in North American professional sports.
During his first year as player-coach, Russell lost to his rival Chamberlain and the Philadelphia 76ers in the 1967 Eastern Division Finals, before defeating the Lakers for the fifth time the following season in the 1968 NBA Finals.
The Celtics and Lakers met once again in the 1969 Finals, this time with Chamberlain joining Los Angeles, only to have Russell pull out a win in Game 7 on the road -- making it his last game as player or coach with Boston.
Russell, described by most as one of, if not the best defensive player of all-time due to his shot-blocking abilities, averaged 15.5 points and 22.5 rebounds per game during his 13-year NBA career.
Considered as the ultimate winner in all of sports, there's no athlete that has accomplished more than Russell. In addition to his 11 NBA championships and two NCAA titles, he also won a gold medal at the 1956 Olympics. Russell has never lost an elimination game going as far back as college, putting together a staggering 21-0 record.
During his time at the University of San Francisco and playing for the Celtics, Russell dealt with racism. From getting denied entry into hotels and restaurants on the road, to getting his house broken into by fans who painted racial slurs on his walls and even defecated in his bed. That was just one of the incidents that led Russell to call the city of Boston a "flee market of racism" and even refused to attend his own jersey retirement ceremony in 1972.
When Celtics teammates Sam Jones and Satch Sanders were not allowed into a coffee shop in Lexington, Kentucky during a trip for an exhibition game in 1961, Russell joined them when they decided to leave in protest by boycotting the game -- as he became an advocate for civil rights.
Russell was one of the many prominent African-American athletes at the Cleveland Summit in 1967, which football star Jim Brown organized when Muhammad Ali refused to serve in the Vietnam War after getting drafted. Russell continued his fight for social justice decades after his playing days, even being awarded with the Presidential Medal of Freedom in 2011 by President Barack Obama for his on-court excellence and his work as a civil rights activist.
The statement released by Russell's family Sunday following his death, not only recognized him as an all-time winner as a basketball player but it also emphasized his fight against social injustice.

"For all the winning, Bill's understanding of the struggle is what illuminated his life," the statement read. "From boycotting a 1961 exhibition game to unmask too-long-tolerated discrimination, to leading Mississippi's first integrated basketball camp in the combustible wake of Medgar Evans' assassination, to decades of activism ultimately recognized by his receipt of the Presidential Medal of Freedom in [2011], Bill called out injustice with an unforgiving candor that he intended would disrupt the status quo, and with a powerful example that, though never his humble intention, will forever inspire teamwork, selflessness and thoughtful change."

Russell, who was inducted into the Naismith Memorial Basketball Hall-of-Fame as a player in 1975, coached the Seattle Supersonics from 1973-77 and the Sacramento Kings during the 1987-88 season in between years of doing color commentary for NBA on ABC and then CBS' coverage of the NBA playoffs.
In 1999, the Celtics re-retired Russell's iconic No. 6, to which he accepted the invitation and received a well-deserved standing ovation. Russell was seen more around the franchise and city again, especially during the team's run to the 2008 championship, becoming close with Kevin Garnett. The NBA named the Finals MVP after Russell in 2009, before a statue of Russell was built outside of Boston City Hall in 2013.
Just last year (2021) Russell was inducted for a second time into the Hall-of-Fame -- but this time as a coach -- along with Celtics great Paul Pierce and longtime team TV play-by-play commentator Mike Gorman. This past All-Star weekend in February, Russell was honored as one of the NBA's 75 best players of all-time.
Thank you Mr. Russell for being an example of a winner, a fighter for what's right and for your infectious laugh that none of us will never forget...may he rest in peace.
Joel Pavón
Follow @Joe1_CSP