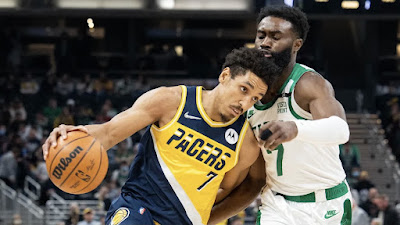 The Celtics announced Saturday that they have acquired Malcolm Brogdon from the Indiana Pacers in exchange for Daniel Theis, Aaron Nesmith, Malik Fitts, Juwan Morgan, Nik Stauskas and a 2023 first-round draft pick.
The trade, which was first reported back on July 1st, is now official and has been viewed so far as one of the biggest transactions of the offseason. Brogdon will wear No. 13.

"We would like to welcome Malcolm and his family to the Celtics," C's president of basketball operations Brad Stevens said via a press release. "We are very excited about what Malcolm brings both on and off the court. His resume speaks for itself. He is the kind of playmaker, shooter, and impact defender that we need in our continued pursuit of Banner 18."

"We are very excited that Sam chose to continue his journey with us," Stevens said of Hauser via the team's press release. "He has a chance to make a real impact with his size, feel, and shooting -- both stationary and on the move.  He's hard-working, unselfish, and competitive -- a great combination for a young player."

"We are thrilled that Luke chose to come back," Stevens added on Kornet. "Luke is a skilled big who can play off the roll or pop and is a good rim protector on defense.  On top of that, he's always added value as the consummate pro who puts team above self."

While these re-signings will add depth off the bench, one signing that has still not been announced yet is the pending addition of veteran forward Danilo Gallinari -- who was reportedly waived by the San Antonio Spurs on Friday and can't be signed by the Celtics until he clears waivers Sunday after 5:00 PM ET at the earliest.

Danilo Gallinari has been waived by the Spurs, sources tell ESPN. Friday was the last day for Gallinari to be waived before his $21.5M contract would have become guaranteed. His guaranteed amount was amended from $5M to $13M as part of the trade to San Antonio.


Stay tuned as the Celtics continue to fill out the rest of their roster before the start of training camp come September.
Joel Pavón
Follow @Joe1_CSP