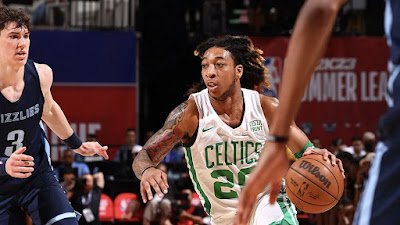 The Celtics beat the Memphis Grizzlies 108-91 Thursday afternoon at the Thomas Mack Center in Las Vegas to win their third straight in Summer League.
Second-round draft pick in last month's draft JD Davison led five C's players scoring in double-figures with 28 points on 9-of-14 shooting, including 4-of-6 from 3, to go along with 10 assists, five assists and three steals.
The 19-year-old rookie signed a Two-Way contract with the Celtics earlier this week, as he'll spit time between the Maine G League roster and the NBA.
Juhann Begarin finished with 19 points, while Justin Jackson added 16 points and Trevion Williams recorded a double-double of 11 points, 11 rebounds for Boston -- who are now 3-1 in Summer League play.
Ziaire Williams was the Grizzlies' high scorer with 21 points, while David Roddy and Kenneth Lofton Jr. each netted 16 points apiece. Memphis is now to 2-2 in Las Vegas.
Davison tallied 19 points in the first half on 5-of-6 shooting and 3-of-4 from deep, as the Celtics had a 51-39 advantage at the break.
The Grizzlies used a 16-9 run to open the the third quarter, before Boston responded with a 15-4 spurt of their own and were ahead 79-63 to end the period.
The Celtics clinched a tie for first place with their victory over Memphis and will play a consolation game on Saturday night against the Brooklyn Nets (8:00 ET on ESPN), which could determine if they'll be in the championship game on Sunday or not.
Joel Pavón
Follow @Joe1_CSP