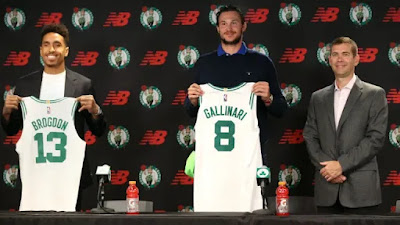 The Celtics held a press conference Tuesday to introduce Malcolm Brogdon and Danilo Gallinari after their deals were made official.
Team president of basketball operations Brad Stevens spoke about the newest additions to a roster that was two-wins shy of an NBA championship.

"It's really clear how good of a fit both of these guys are," Stevens said Tuesday morning while sitting to the left of Brogdon and Gallinari during the C's introductory presser at the Auerbach Center.

Both fill the needs of playmaking and scoring off the bench, something Stevens was clear he wanted to add following the Celtics run to the Finals.
Brogdon has career averages of 15.5 points, 4.2 rebounds, and 4.8 assists per game in his six NBA seasons as a combo guard. Gallinari has averaged 15.6 points and 4.8 rebounds per contest over a 14-year career.

While Brogdon has only been in the league for half-a-dozen years, his hunger for an NBA title is just as strong as his new teammate in Gallinari.

"I'm in my prime, I'm 29 years old," explained Brogdon, who was officially acquired from the Indiana Pacers Saturday via trade. "I experienced winning at a high level in Milwaukee my first three years, went to Indiana, had a solid season and then two rough seasons (winning-wise). So this is everything I've wanted: to be able to get back to this level, to be able to compete with guys that want to win a championship and that are all in, that want to sacrifice to win. So it's very fortuitous for me to be here and I think it's the perfect time for me."

The two veterans were almost destined to finally wear Celtics green, as both of their families have been long time supporters of the team.

"My grandfather, who passed away a few years ago, was the biggest Bill Russell fan, was the biggest Red Auerbach fan, and loved the Boston Celtics," said Brogdon. "So to be able to play here is definitely a blessing for me. I've told everybody I've met in the organization that it's an honor to put on his jersey, it's a privilege. The most historic, successful, high-reaching organization in the league, so I'm extremely excited to be here."

As for Gallinari, who was signed as a free agent, he's a fan of and has idolized Larry Bird while growing up in Italy.

"I grew up with my dad since I was a little kid being a Celtics fan, being a Larry Bird fan," Gallinari said. "When the Celtics came [to] the table it was almost like a no-brainer. You walk even in this facility, you look around and see what's going on around the banners and the history and everything the Celtics were about, it was an easy choice."

With Brogdon and Gallinari now in the fold, they are not worried about starting or coming off the bench at this stage of their respective careers, they just want to win.

"I want to come here and sacrifice to win," said Brogdon. "On a great team, everybody sacrifices to win. [Jayson] Tatum, [Jaylen] Brown, all of us have to take things off our plate and sacrifice a few things.
"So for me, I think Gallinari too, we're trying to add. We're not trying to take away. This team already has something special, they've made it to the Finals, and they already have a recipe. And I want to add to that recipe, not disrupt it. Whatever this team needs from me, whatever Ime [Udoka] needs from me, whatever my teammates need for me, that's what I'm gonna do."

Stevens is off to a great start this offseason on not only keeping the Celtics a contender and improving the roster, but also gaining the trust of the front office -- especially when it comes to spending and dipping into luxury-tax territory -- to which he maintains "We've had the green light the whole time to make those calls."
Still, the message is clear and remains the same for the upcoming 2022-23 campaign that has clear championship aspirations following this past season's success.

"For us here in Boston this year, we know we have a chance to do something special," said Brogdon. "It's up to us to hold each other accountable and take advantage of this moment."

While the summer is still young, Stevens has indicated that the Celtics aren't done adding to the roster just yet. However, Brogdon and Gallinari are clear homeruns anyway you look at it, any other moves going forward would simply be icing on the cake.
Joel Pavón
Follow @Joe1_CSP