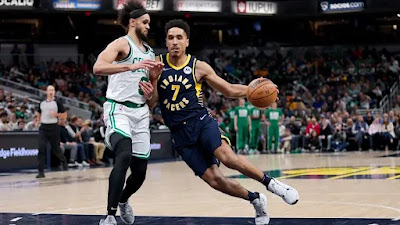 Malcolm Brogdon is officially a Celtic, following the team's press release Saturday announcing the trade with the Indiana Pacers.
C's president of basketball operations Brad Stevens hit a homerun when he moved Daniel Theis, Aaron Nesmith, Malik Fitts, Juwan Morgan, Nik Stauskas and a 2023 first-round draft pick -- as first reported on July 1 -- in exchange for a veteran playmaker and scorer in Brogdon as soon as the offseason got underway.
While speaking with ESPN's Adrian Wojnarowski on the latest podcast episode of the "Woj Pod," Brogdon acknowledged that Stevens discussed what his potential role would be if he wanted to play in Boston -- something the 2017 Rookie of the Year is already onboard with.

"Brad, I think, did have a conversation with my agent. And talked about me coming into Boston and embracing a sixth-man role. If I wanted to come to Boston, that would be one of the things I would need to embrace," Brogdon said. "And for me, I've made a lot of money. I've won a lot in Milwaukee, I won some in Indiana. But I really want to get back to winning on a high level. I want to win a championship. So whatever I can sacrifice to get back to that championship level, I'm willing to do it and compete."

Brogdon, who spent three years with the Milwaukee Bucks before playing the last three seasons with the Pacers, averaged 19.1 points and 5.9 assists in 36 games during the 2021-22 campaign. Once Indiana dealt former teammate Domantas Sabonis at this past February's trade-deadline, Brogdon sensed that his time in Indy was coming to an end.
However, after watching the Celtics run to the NBA Finals, Brogdon didn't think it would be possible to land on a loaded roster with the likes of Jayson Tatum and Jaylen Brown on it, especially since Stevens was able to pull the trigger on the deal for Brogdan without having to involve any of Boston's top eight rotational players.

"For myself, I feel like I'm a high-level player in the NBA. I feel like I'm very well respected around the league. And I feel like it would take a lot for a team like that to get me, especially if they have most of the pieces and they already have a high payroll," Brogdon told the NBA insider.

Still, with the acquisition of Brogdon and also the reported signing of veteran sharpshooter Danilo Gallinari, Stevens has immediately added playmaking and scoring off the bench -- two areas that were deemed a priority this offseason when it came to the Celtics' needs after being two-wins shy of banner 18.

"I think it really is a testament to the Boston Celtics and how much they want to win," Brogdon said. "They're willing to spend. They're willing to possibly have a guy that they're paying $20 million a year come off the bench as a sixth man and try to help them win a championship."

Brogdon is more than grateful for the opportunity to not only compete for an NBA title, but how smoothly the whole process turned out to be with his former team.

"They [Pacers] made the best decisions for themselves and they sent me to a contender," Brogdon said. "I'm excited about the opportunity to be with Boston and I'm very appreciative of how Indiana handled it."