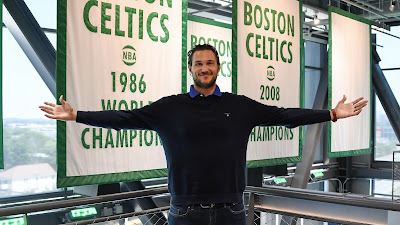 Danilo Gallinari, the newest member of the Celtics, is beyond excited to finally get the opportunity to play in Boston.
The veteran forward recently sat down with A. Sherrod Blakely, Kwani Lunis and Gray Washburn on CLNS Media's the A-List Podcast and revealed how he'd come close to signing with the C's a couple of times in the past before getting a deal done this offseason.

Gallinari was able to sign a two-year, 13.3 million contract with the Celtics as a free agent once he was waived by the San Antonio Spurs, following being traded from the Atlanta Hawks for Dejounte Murrary late last month.
At 34-years-old, Gallinari's is coming off his 13th season in the NBA where he averaged 11.7 points on 43.4% shooting from the field and 38.1% from deep to go along with 4.7 rebounds per contest in 66 games played (18 starts) for the Hawks. Both he and Malcolm Brogdon (acquired via a trade with the Indiana Pacers), who were introduced during a team-presser almost two weeks ago, will look to not only add playmaking and scoring to Boston's second unit, but they're also willing to play any role needed in order to get the Celtics back to the NBA Finals.

While primarily a starter for nearly his entire career, Gallinari's last two seasons in Atlanta has prepared him to be the shooter and scorer off the bench that the C's need in order to give stars Jayson Tatum and or Jaylen Brown a breather without the offense going stagnant.

"I think I can help a lot just by doing what I've been doing for all these years," Gallinari said. "They did a great job last year, but I think that I can help."

Gallinari, who was in the Eastern Conference Finals during the 2020-21 campaign with the Hawks, believes that with his mental toughness mixed with this young roster is a good mix to give the Celtics another chance to compete for a championship this upcoming season.

"I think they have a tight young group with a lot of experience already," he said of the Celtics. "They've been to the playoffs almost every year for the past few years, and especially what they did last year. I think that's a group that can do some damage in the future and so that was the main goal for me. Being part of this, especially the city, the franchise, the history, a lot of reasons."

With the additions of Gallinari and Brogdon, Boston will look to improve on their Finals run -- which ended in six games to the Golden State Warriors this past June.
Joel Pavón
Follow @Joe1_CSP