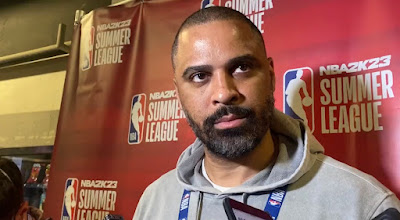 The Celtics find themselves a much deeper roster heading into the 2022-23 campaign after coming within two wins of an NBA title nearly a month ago.
Team president of basketball operations Brad Stevens officially introduced the additions of combo guard Malcolm Brogdon and sharpshooter Danilo Gallinari -- two veterans that will provide more playmaking and scoring off the bench next season.

"It's really clear how good of a fit both of these guys are," Stevens said Tuesday morning while sitting to the left of Brogdon and Gallinari during the Celtics introductory presser at the Auerbach Center.

But according to Boston's head coach Ime Udoka, it's up to his starting-five from their run to the Finals, which include Jayson Tatum, Jaylen Brown and Marcus Smart, that will have to strive to improve in order to get over that hump.
Udoka was present at the Celtics' 103-92 Summer League win over the Golden State Warriors Tuesday night and he shared what his message was to his core-five after the deals were announced.

"I told the group, 'With Malcolm and Danilo being added, it's great for our depth. But the growth is going to have to come from you guys, the starting five.' Those guys, they know that," Udoka told reporters during a mini-pregame presser in Las Vegas. "They made some strides this year, but we can kind of hit the ground running next year due to what we did this year and them understanding what we want them to be. I think they did a tremendous job with that this year, but can still take steps for sure."

Brogdon at age 29, has already expressed his willingness to play a sixth-man role, while Gallinari is a career 38% three-point marksman in his 14-years in the league. While either would have been a huge lift for the Celtics' lack of depth in the last three games of the Finals a few weeks ago, it was the team's inconsistencies on offense and turnovers that also plagued them during their playoff run.

The Celtics are definitely moving in the right directions since the start of the offseason, they'll look to continue to fill out their roster before training camp kicks-off in mid-September.
Joel Pavón
Follow @Joe1_CSP