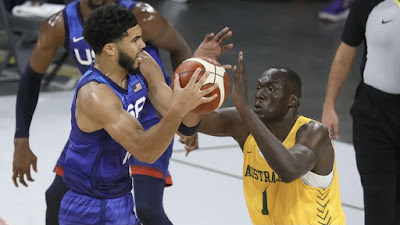 Team USA has lost their second straight exhibition 91-83 to Australia on the road to the Tokyo Olympic Games, Monday night in Las Vegas.
This was the first time Team USA has lost back-to-back games since the start of using NBA players back in 1992, piling up a 54-2 record before losses to Nigeria and now "The Boomers" in their last two outings.
Damian Lillard led the US with 22 points in the loss, while Kevin Durant scored 17 points once again for the second consecutive night.

"These (international) teams are experienced, and we are still working at becoming a team," Lillard said in his postgame presser. "We're not just going to roll the ball out and beat these teams … these teams have a starting five of NBA players now."

Jayson Tatum, who started against Nigeria, came off the bench and struggled from the field (4-of-12) to finish with just eight points, four assists and three rebounds in 27 minutes of action.
Currently ranked at No. 3 in the world, Australia shot 52.9% from the field behind leading scorer Patty Mills with 22 points in the win. Joe Ingles added 17 points while Matisse Thybulle had 12 points in the win.

"We walked into this game expecting to win," said Ingles during his postgame conference.

For the second straight game Team USA was outrebounded (32-25) and only managed a scoring output in the 80's. It seems like the Americans are also still getting a feel for the FIBA rules as they continue to get out-bullied in the paint on both ends of the floor.

"As the game goes on, as we continue to go through this process, we're figuring the out the difference between the international game and the game that we play," Lillard said. "It's been five or six moments where we're all looking around like what's going on?"

Team USA will have little time to make adjustments, as they'll face Argentina tonight for their third of five exhibitions, before heading to Japan.
Joel Pavón
Follow @Joe1_CSP