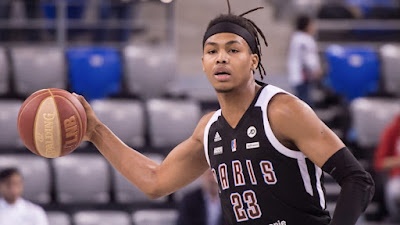 The Celtics selected Juhann Begarin with the No. 45 overall pick in the 2021 NBA Draft late Thursday night.
Begarin, who was one of the youngest players in the draft with his 19th birthday being on August 7, is a 6-foot-5 guard out of France.

The pick is in ☘️


Begarin has been playing professionally for four years and two different clubs in France. This past season in 39 games for Paris Basketball, Begarin started 38 times, while averaging 11.7 points, 3.5 rebounds, 2.9 assists and 1.4 steals per game. Begarin also shot 45.6% from the field and 34.2% from 3-point range.
It's expected that Begarin will remain overseas as a draft and stash prospect for at least one more season, similar to what the Celtics did with Yam Madar -- another second round draft pick in the 2020 NBA Draft. Madar will join the team's Summer League roster in Las Vegas next month.

"We really like Juhann. He's a guy that's a big, strong, versatile guard that can guard up with his strength and athleticism," said Brad Stevens via Zoom. "He came in for a workout the other day. We got to see him up close and we've been paying attention to him for a long time. He's a guy that we think, at his age and his body and his physical abilities and the way that he works and the time that he's put in thus far, is going to have a long, really good career ahead of him. We're excited that we were there to draft him there at No. 45."

Begarin took part in the pre-draft G-League Elite Camp to show off his 7-foot wingspan. At 6-foot-5 he'll most likely be a combo guard at the NBA level, while using his athleticism and size to power through opponents. He's also a solid defender when it comes to his length on the opposite end of the floor. Overall Begarin is a score-first guard with ballhandling and playmaking skills.
The Celtics had a quite night since they did not have a first round draft pick, despite Stevens saying they looked into trading up, but "weren't willing to offer much."

"Leading up to the draft, we had some conversations with people, but nothing really significant," Stevens said. "We thought it was going to be a pretty predictable night from the standpoint that we were just going to pick where we were slotted and go from there. It wasn’t all that eventful which was OK."

With no significant changes to the Celtics roster following the draft, Stevens can focus on the rest of the offseason, as free agency begins on August 2 at 6 PM EST.
Joel Pavón
Follow @Joe1_CSP