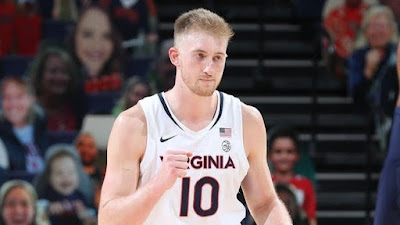 On a night where the Celtics had only one pick in the second round and none in the first during Thursday night's NBA Draft, Brad Stevens was not done following his selection of Juhann Begarin.
After taking the draft and stash French guard at No. 45, the Celtics new president of basketball operations reportedly filled one of his Two-Way spots with undrafted forward Sam Hauser of Virginia.
According to Sam Charania of The Athletic, Hauser and the Celtics agreed to a Two-Way contract early Friday morning.

Sources: Undrafted Virgina forward Sam Hauser has agreed to a two-way contract with the Boston Celtics.


Hauser is a 23-year old rookie that played three years at Marquette with his twin brother Joey, before the two separated prior to their start of last season. Sam is coming off a very good senior campaign at Virginia (his brother went to Michigan), shooting over 40% from 3-point range and 50% from the field.
At 6-foot-8, Hauser is considered a stretch forward and a good on-ball defender, as he'll guard some 3s and 4s at the NBA level. His scouting report also shows he's a good spot up shooter and off screens.
Hauser will get to show off his skills during Celtics Summer League in Las Vegas next weekend, as Brad Stevens confirmed that the following players are also on the roster: Yam Madar, Payton Pritchard, Carsen Edwards, Aaron Nesmith, Romeo Langford, and Moses Brown. Assistant coach Joe Mazzulla, one of the few still employed by the C's from Stevens' bench, will serve as head coach.
Click here, for the Celtics full Summer League schedule, as games tip-off  on August 8.
Joel Pavón
Follow @Joe1_CSP