Jayson Tatum on Bradley Beal missing Olympics: 'I was upset' 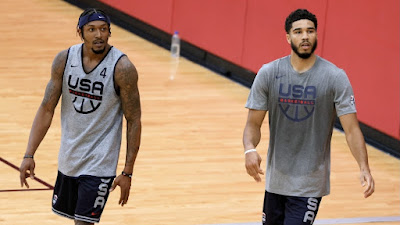 Jayson Tatum knows a thing or two on how COVID has effected him personally, now it has intervened once again just as Team USA is set to participate in the the 2020 Tokyo Olympics.
Tatum's teammate and best friend Bradley Beal was placed into health and safety protocol last week and will miss the Olympics. While losing the All-Star guard is a blow to Team USA's roster, it's especially tough on Tatum, who was looking forward to finally getting a chance to play with his childhood buddy.

"I was upset," Tatum admitted during a press conference after Team USA arrived in Tokyo. "This was going to be a great opportunity for both of us (playing with each other).

"Unfortunately not going to be able to happen, but looking forward to competing out here and winning a gold medal and making sure we have an extra one for him."

Tatum also added that he was "first and foremost concerned" with Beal's health and hopes that he's doing fine, all things considered.
While Beal's name has been in rumors connected to the Celtics, the Wizards guard has a player option following the 2021-22 season that had many speculate that Tatum would possibly recruit his friend, as they both have always wanted to be on the same team. Now that Beal is out of the Olympics, could teaming up in the NBA be their only opportunity to play together?
Stay tuned.
Tatum and Team USA will tip-off their group stage at the Olympics starting on Sunday against France at 8 AM.
Joel Pavón
Follow @Joe1_CSP