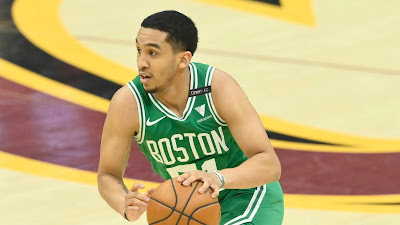 Tremont Waters' time in Boston may be over, according to a report via Jared Weiss of The Athletic.
The Celtics two-way guard is working out in his native state of Connecticut "and is looking for more of an opportunity to break into a rotation elsewhere in the NBA this upcoming season."
Waters, who has been on a two-way deal over the past two years, along with fellow teammate Tacko Fall, has one more season of eligibility to remain a two-way player, but it seems that the point guard is seeking a standard NBA contract this summer.
While the chances that Waters remains with the Celtics are still a strong possibility, don't be surprised if both parties decide to go their separate ways after the former LSU star has not been able to crack Boston's regular rotation in the last two seasons.
With the departure of Kemba Walker, there may be a spot for Waters in the Celtics' backcourt depth or Boston could be simply looking to move on from the 5-foot-10 guard.
Waters, the 51st pick in the 2019 NBA draft, averaged 3.8 points and 2.4 assists per contest during the 2020-21 campaign. He also shot 39.5% from behind the 3-point arc in 26 games played this past season.
Joel Pavón
Follow @Joe1_CSP