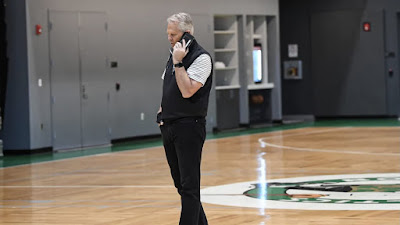 The Celtics once again failed to pull off a comeback rally Wednesday night, falling to the Dallas Mavericks 113-108 at TD Garden.
Danny Ainge was asked the same question of why the team continues to struggle and he is just as perplexed as everyone else when it comes to this season thus far.

"I wish I had an answer to that," the Celtics’ president of basketball operations said during his weekly appearance Thursday morning on 98.5 The Sports Hub's "Toucher & Rich."

Despite two trades made last week at the deadline, the first in-season move Ainge has pulled off since 2015, the Celtics are 2-2 with their new additions and are below .500 with a 23-25 overall record. Still, in back-to-back losses to the Pelicans and Mavs respectively, the C's had to climb out of double-digit deficits in the fourth quarter but fell short both times at home.

"I do see adversity having an impact," Ainge said. "I know guys were ready to play. They were excited to play. They were in good spirits. They started the game out with energy. And when shots didn't fall in the first half, I just saw some heads hanging."

Even Celtics head coach Brad Stevens voiced his frustration and questioned his team's mental toughness, saying his players tend to let adversity "take us out of what we're doing for too long."

However, Ainge holds "everyone," himself included and Stevens accountable for the Celtics' woes this season. But he also made clear that Stevens has "zero responsibility" for players' poor shooting performances or not playing with effort, going as far as saying the notion that coaches should have to motivate players is "way overrated."

"I'm putting it on my players' shoulders right now," Ainge said. "I think they need to look internally, they need to want it more, and they need to be able to fight through adversity better. That's all I'm saying."

"I know Brad fights through adversity," he added. "I know he's preparing for the game and he's respecting every opponent that he sees. I don't have any doubt about that. But I'm worried about some nights the way we come out to play."

With 24 games left in the regular season, Ainge believes the the team's chemistry will factor just as much as wins and losses once the offseason comes around. The decisions to add to core of the roster or "mix things" up will become much more clearer.

"I still see our guys working. I still see them motivated…I still like a lot of our guys and their everyday approach to the game."
"I just…for the life of me, it's hard to understand how we can play so hard and so well for those 30-32 minutes a night and just not — and every night it's a different time, it can be the fourth quarter, it can be the second quarter or the first quarter — we just don't play well. And we don't fight as hard as we need to through that adversity. I wish I had a better answer for you. I don't."

On the topic of injuries and COVID, Ainge spoke about the Celtics having a hard time staying healthy and that has impacted the the team being inconsistent as well.

"There is no continuity. There's different players in different positions every night," he said. "We'd just like to get everybody not sick and not injured so we can play together for a couple weeks at a time and see how we do."