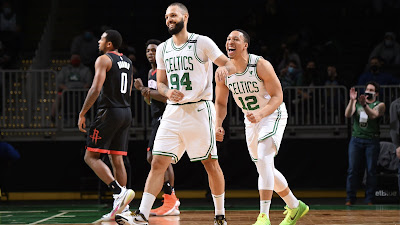 Combining for only six points in his first two games with the Celtics, Evan Fournier caught fire late to pull away from the Houston Rockets in a 118-102 win at TD Garden Friday night.
Along with Fournier (23 points), Robert Williams had a career game scoring 20 points on a perfect 9-of-9 from the field, while also grabbing nine rebounds. With four players scoring over 20 points, the Celtics cruised past the Rockets in what was one of their best all-around games of the season.

"We had time to circle back to what we thought was most important as a team and say okay here's what we need to do to be a little bit better to put our signature on these last 24 games, starting with tonight. That's what we did. Guys did a good job and stayed together," said Brad Stevens in his postgame presser.

Boston's playmaking was on full display with three players totaling at least eight assists-- Smart dished out a team-high 10 assists, Kemba added eight assists, and Williams finished with eight (career-best). Tatum led the Celtics in scoring with 26 points (9-of-17 shooting) while Brown scored 22 points and secured a team-high 11 rebounds.
Christian Wood finished with 19 points (8-of-16 from the floor) and 10 boards, while former Celtics Avery Bradley (15 points) and Kelly Olynk (10 points) contributed off the bench for the 13-35 Rockets.
Acknowledging Fournier's offensive outburst, coach Brad Stevens summed up how his team felt, especially Fournier, having a strong outing after some disappointing performances individually and collectively.

Fournier, feeling good about his performance and contributing to the win, pointed out how he planned to celebrate his first victory in Boston.

"It feels even better that we got the win. It's my first win, as a Celtic. And it's just a good overall night. I'm going to enjoy my glass of wine tonight and sleep really well."

In need of a win after Wednesday's disappointing loss to the Mavericks, the Celtics came out with energy early on, making four out of their first five threes and 7-of-10 of their field goals to jump out to an early 18-10 lead. The Celtics' balanced scoring attack contributed to their eight points advantage after the first quarter as Kemba Walker, Brown, Tatum, and Williams each had at least five points early on.
Robert Williams continued to fuel the Celtics' strong start early on in the second, scoring in the paint on back-to-back possessions. After hitting from deep early, Boston cooled down in the quarter, missing all eight of their attempts.
Despite the Celtics' offense slowing down at the end of the first-half, Williams' hustle helped Boston finish the quarter out strong. With Brown and Williams forcing Danuel House Jr. into a turnover, Williams diving on the parquet passed it to Smart who threw a near full-court dime to Tatum in transition to give Boston a 12-points lead at the half.
Much like the beginning of the second quarter, Williams brought the energy early in the third. Forcing Christian Wood into a missed layup, Tatum pushing the pace, dished it to Walker for a 3 on the wing who swung it to Williams for an easy wide-open dunk.
After a quiet first half, Brown took over in the third quarter, scoring a quick 13 points highlighted by the play of the night. Driving hard to the paint from the top of the key, Brown took flight finishing an electrifying posturizing dunk over Kenyon Martin Jr. which received plenty of attention from the 2,000-plus fans in attendance. Tatum also had a strong start to the second half, adding 13 points of his own, including making two 3-pointers towards the end of the third to offset Houston's 8-0 run late.
With a 12- point advantage, the Celtics held a healthy lead, but considering their fourth-quarter struggles this season Boston knew it needed a spark to close it out.
That spark started with Williams who continued to dominate offensively with baskets on consecutive possessions to start the quarter. Also trying to get his teammates involved, Williams dished out four-straight assists to Fournier, who knocked down four 3-pointers less than five minutes in.
Knocking down six straight three-pointers in only seven minutes, the former Magic forward helped increase the Celtics' lead to almost 20. By making seven 3-pointers on the night, Fournier tied the record for the second-most 3-pointers made by a Celtic off the bench since Eddie House made 8 back in 2009.
Behind Fournier's shooting, the Celtics easily pulled away from the Rockets to snap their two-game losing streak. One game under .500, the victory over Houston put Boston only 1.5 games behind the Hornets for the No.4 seed in the Eastern Conference-- adding some importance to Sunday's matchup between the two teams.
Bouncing back after a disastrous 0-10 shooting in his debut, Fournier's mindset remains the same even after a perfect shooting performance in the fourth quarter.

"I always try to stay in the moment. Never too high, never too low. That's been my motto for years now," said Fournier postgame after finishing 7-of-11 from deep. "I've played nine years in this league now. I know who I am and know what I'm capable of doing."

Struggling to acclimate himself into the Celtics' rotation over the first two games, Fournier hopes to put his difficult debut behind him and contribute to winning.

"That first game was not the way I wanted to start with the Celtics, but it's not going to define who I am with his team. I'm going to try to impact winning as much as I can and I'm really happy about the win tonight," said Fournier.

The Celtics continue their long home-stand on Sunday against the Charlotte Hornets (25-23), welcoming back Gordon Hayward and Terry Rozier. Tip-off is set for 6:00 P.M and will be available to stream on NBC Sports-Boston.

The Celtics made 52.3% of their field goals compared to the Rockets' 43% of their shot attempts. Boston knocked down 17 3-point shots compared to Houston's 12 made 3-pointers. The C's also out-rebounded the Rockets 50-40, and finished with 35 assists on 46 made field goals. Both teams tied with 46 points in the paint.
Ian Carrano
Follow @IC_Sports1