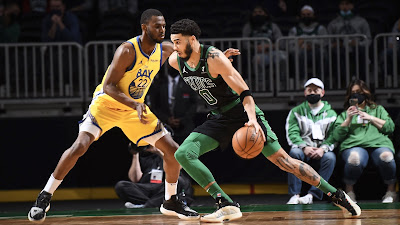 It was a shootout between All-Star Jayson Tatum and superstar Steph Curry in a primetime matchup of the two hottest teams in the NBA, but it was the Celtics that held on to a 119-114 win over the Golden State Warriors Saturday night at TD Garden.
Tatum finished with 44 points -- the second highest scoring output of his career -- on 16-of-25 from the field and 5-of-9 from deep to go along with 10 rebounds to lead Boston to their sixth straight win and eighth of the last nine. Kemba Walker scored 26 points and grabbed eight rebounds, while Marcus Smart added in 16 points, 9 boards.

"It took everything," Walker said in his postgame comments. "It was a hard-fought game. We knew it was going to be tough. These guys are playing so well. Obviously they've got one of the best players in the world. He's incredible."

Curry had 47 points on 15-of-27 shooting, including hitting 11-of-19 from 3-point range and Andrew Wiggins had 22 points. Kent Bazemore chipped in 16 points for the Warriors (28-29) who had won five of their last six before coming into Boston.
The Celtics were without Jaylen Brown (non COVID illness) and Robert Williams (knee soreness), but newly signed veteran forward Jabari Parker made his debut, shooting 5-of-6 to total 11 points in 16 minutes off the bench.
Boston trailed by as many as 16 in the second quarter before they used 21-2 run to take a lead in early in the third. Back-to-back 3's from Curry and Draymond Green (five points, 10 assists) put the Warriors ahead 109-103 with 4:10 left in the final frame.
Walker hit a pair of free throws, as Tatum and Smart followed that with back-to-back made 3's of their own. Tatum made a tough layup and Walker sank a clutch 25-foot 3 with 24.8 seconds remaining to wrap a 13-2 run and give the Celtics a 116-111 advantage.
Another step back 3 by Curry, made it a two-point game, but the former two-time league MVP missed a half-court shot with 10 seconds left to play and Boston hit three of the next free throw attempts to take sole possession of the fourth seed in the East at 31-26.
While Tatum and Curry went back and forth, the Warriors' point guard rolled his ankle with seven minutes left in the fourth, but he ended up staying in the game. About 90 seconds later, Golden State's Juan Toscano-Anderson went over the scorer's table trying to save a loose ball.
After a timeout was used, the Warriors' forward was helped to the locker room while holding a towel to the back of his head, as he did not return and it was later announced he had suffered a concussion.
It was a battle early on between Tatum's 9-of-12 shooting (23 points) and Curry's (22 points), 16-point second quarter that resulted in a 66-60 Warriors lead at intermission before Boston used an 11-2 run to open up the second half and take their first lead of the night.

"He's incredible," Walker said of Tatum. "He can score with the best of them. He's making the right plays out there. He was unbelievable. We needed every bucket he had tonight."

The Celtics continue their mini homestand when they host Daniel Theis and the Chicago Bulls (23-33) Monday night. Tip-off is at 7:30 PM EST.