Evan Fournier is out vs 76ers due to health, safety protocol 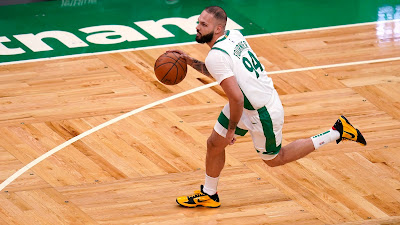 The Celtics will be without Evan Fournier Tuesday night against the Philadelphia 76ers due to the being placed into the league's health and safety protocol, per the team's updated injury report.
The veteran guard has been on fire for Boston off the bench in his last two games, while averaging 20 points on 59% shooting and 68% from 3-point range.
Fournier just starting to find his stride after combining for six points in his first two appearances as a Celtic, to following it up with two back-to-back great shooting performances in the C's wins over the Houston Rockets Friday and Charlotte Hornets on Sunday respectively.
This is the second time that Fournier has been ruled out due to being in health and safety protocol since being dealt to Boston from the Orlando Magic just hours prior to the NBA's trade deadline a few weeks ago.
Tristian Thompson, who's been on the sidelines since March 16, also remains out. The Celtics' big man is in post health and safety protocol reconditioning.
The Celtics are 2-2 on their current seven-game home-stand as they're set to host the Sixers at TD Garden tonight for the first time this season after going 0-2 in the first two meetings in Philly.
TNT will have the national broadcast tipping-off at 7:30 PM EST.
Joel Pavón
Follow @Joe1_CSP