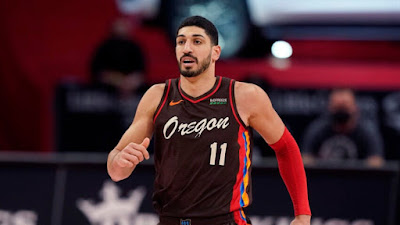 Enes Kanter spent only one season with the Celtics, but he still keeps an eye on his former teammates whenever possible.
The veteran center is now in Portland and he's preparing to face Boston for the first time Tuesday night since being traded to the Trail Blazers. Kanter caught up with Chris Forsberg of NBC Sports Boston on the "Celtics Talk Podcast" and spoke about watching C's games, going as far as saying "If they make a mistake, I text them and make fun of them and stuff."
Both teams look to improve playoff positioning ahead of their first head-to-head of the season, as the Celtics are 28-26 with the seventh seed in the East and the Blazers are 31-22 which is currently good enough for the sixth seed out West.
As Portland is prepared to host Boston tonight, Kanter commented on how Jaylen Brown told him he was going to take advantage of the former Celtic teammate's weaknesses.

"I texted Jaylen Brown yesterday and I said, ‘You better not put me in the pick-and-roll, man,'" Kanter said. Jaylen was like, 'You know I certainly will, and then iso.' And I was like, 'Come on, man!'"

While Kanter expects for the trash-talking to continue on the court, he simply has one goal in mind and that's not to get dunked on by either Brown or the reigning Eastern Conference Player of the Week; Jayson Tatum.

"All I care about is trash-talking with them," Kanter said. "I cannot wait to just see Jaylen Brown and Jayson Tatum and Kemba (Walker) just trash-talking.
"I better not get dunked on," Kanter later added. "If I get dunked on, they're going to be talking about that the whole summer….That's my main focus right now: Not getting dunked by Jaylen or Jayson. Because if I do, it's over."

Other than the trash-talk, Kanter says he's impressed with this current Celtics roster, especially with the growth of Robert Williams and the leadership of Brown, Tatum, Kemba Walker and Marcus Smart. Despite the C's being looked as an inconsistent team so far this season, Kanter is confident that his old team can still make a deep playoff run.

"People need to understand they've played together for only so little games," Kanter said. "…I believe once the playoff time comes it's going to switch. I believe that. If I look at the East right now, after Brooklyn they are a top two or three talented team."
"After Brooklyn, Boston is the most scary team because their talent level is off the roof. If they can gain their confidence, they are definitely going to break so many hearts….I believe it. Watch."

The Celtics, who are on a three-game win streak, tip-off against the Trail Blazers at 10 PM EST on TNT.
Joel Pavón
Follow @Joe1_CSP