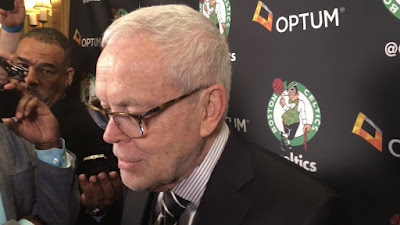 Once again TV play-by-play legend Mike Gorman didn't hold his tongue when it came to criticizing this season's Celtics roster.
It was only two months ago when Gorman ripped the team for how they were playing; in particular what he viewed as the selfish play of Jaylen Brown and Jayson Tatum just prior to the All-Star Game.
Fast forward to Wednesday morning, just hours following the Celtics' embarrassing loss to the Oklahoma City Thunder -- where Tatum sat out with an ankle injury and Brown finished with 39 points -- Gorman once again had no issues calling out the team.

"You don't want to be really negative, but what they are doing on the court is mostly negative," Gorman said during his appearance on 98.5 The Sports Hub's "Toucher & Rich" program. "If you're doing your job to describe it, you'll get a lot of people angry."

Gorman listed off a few issues he believes is currently keeping the Celtics from playing up to their potential, such as the team not being fully healthy, which included giving Tatum a few games off.

"There's a lot going on in this kid's life for 23 years old, and I think he needs a rest," Gorman said of the Celtics forward.

The long-time Celtics TV announcer also noted that at times someone needs to check guard Marcus Smart to a certain extent and that the roster could use a veteran or two because he doesn't think Tatum or Brown can lead this team going forward when asked about the roles of both young stars.

"I don't think so," Gorman said. "I think we need someone right now who is 28-30, who has been around the league. I thought Kemba [Walker] might be that guy, but he's just been constantly plagued with injuries. He's never been given the opportunity or had the opportunity to play five, six, seven games in a row. It's always, can't play the second night of a back to back, something is tweaked. Now he's got a hip problem, he’s not going to play tonight. So he's been kind of snake-bitten from an injury point of view.
"I think they were looking at him as that presence of a 28 to 30-year-old guy who has been around and can keep the younger guys not so much in check because I don't think they are out of control, but just take the responsibility off of them for being the leaders of the team and step forward and be the leader himself. Again, we just don't have that guy."

Despite the Celtics snapping a three-game skid on Wednesday night against the Charlotte Hornets, with Brown and Tatum combining for 73 of the team's 120 total points scored, Gorman added that the front office has been well aware of the lack of leadership all season.

"I'm not saying anything that Danny [Ainge] doesn't know well," Gorman said. "But he's just unable to get [veterans] at the price he's willing to pay right now."

With nine games remaining in the regular season and the 33-30 Celtics as the sixth seed, they'll host the San Antonio Spurs (31-30) Friday night at TD Garden, beginning at 7:30 PM EST.