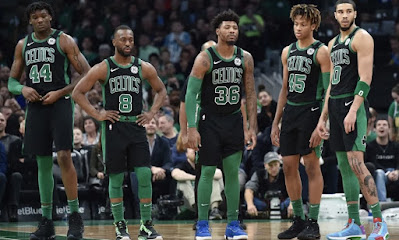 The playoff picture in the Eastern Conference is as tight as it has ever been with 13 games remaining for the Celtics in the regular season.
Following their loss to the Bulls Monday night, Boston is currently the sixth seed at 31-27, a half-game behind the New York Knicks (32-27), who have won seven straight.
The Celtics are 6-1 in their last seven and there is still time to grab the fourth seed or fall as far as ninth, since there only 3.5 games that sperate the fourth and eighth seed before the play-in tournament begins on May 18, with the first round of the playoffs scheduled to tip-off May 22.
So where does coach Brad Stevens and the Celtics stand in terms of a playoff push? Here's a look at how the postseason could shape out
How this year's new playoff format works?
The NBA Play-In Tournament tip-off on May 18 and will feature The No. 7 seed through No. 10 seeds in both the East and West, respectively that'll qualify for the mini tourney, which consists of two rounds.
Round 1
No. 7 seed vs. No. 8 seed (winner earns seventh seed; loser goes to Round 2)
No. 9 seed vs. No. 10 seed (winner to Round 2; loser eliminated)
Round 2
Loser of 7-8 vs. Winner of 9-10 (winner earns eighth seed; loser eliminated)
Once the No. 7 and No. 8 seeds are decided for each conference, the first round will begin on May 22 with the traditional format: seven-game series featuring the 1 vs. 8, 2 vs. 7, 3 vs. 6 and 4 vs. 5 matchups.
The Celtics are 8.5 games behind the first seed Philadelphia 76ers (39-18) and a game out of the fourth seed, where the Atlanta Hawks are at 32-27. Boston is also a game ahead of the seventh seed Miami Heat (30-28) and 2.5 games up on the eighth seed Charlotte Hornets (28-29).
If the season ended today and minus the play-in tournament, the Celtics would face the Milwaukee Bucks (35-22) in the first round as the No. 3 seed vs No. 6 seed matchup and they'd be the road team to start the series.
Here how the rest of the East would look like:
No. 1 Philadelphia 76ers vs. No. 8 Charlotte Hornets
No. 2 Brooklyn Nets vs. No. 7 Miami Heat
No. 4 Atlanta Hawks vs. No. 5 New York Knicks
With 13 regular-season games left for the Celtics, their upcoming schedule is not the easiest. They'll face two of the league's best teams on back-to-back nights against the Phoenix Suns (Thursday) and Brooklyn Nets (Friday).
Boston -- before the regular season ends -- will also play the Portland Trail Blazers (May 5), the Heat (May 9th and 11th) and the Knicks (May 16).
We'll keep you posted as the tightly packed playoff race in the East is decided within the upcoming weeks
Joel Pavón
Follow @Joe1_CSP