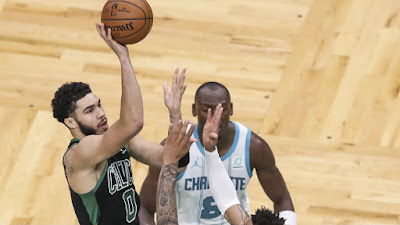 For a second straight game the Celtics had at least five players score in double-digits, as they cruised past the Charlotte Hornets 116-86 at TD Garden Sunday night.
Jayson Tatum had a team-high 22 points on 8-of-15 shooting from the field, as Jaylen Brown and Evan Fournier each finished with 17 points a piece while both connected on a combined 9-of-13 from deep.
Robert Williams III was pleased with the Celtics back-to-back win at home after posting16 points (7-of-9), eight rebounds, two steals and a block in 25 minutes of action as a starter.

"I feel like this is a big win obviously keeping the pace we're on, keeping it rolling," Williams said in his postgame press conference. "But we've got to have a lot more wins to get where we want to be."

Boston held the shorthanded Hornets (25-24) to 86 points on 32-of-80 made shot attempts, as they're now .500 again at 25-25 (eighth seed) and a game out of fourth place in the East.
Terry Rozier had 22 points, 7 rebounds to lead Charlotte, who were without LaMelo Ball (sprained wrist) and Malik Monk (sprained ankle). Gordon Hayward was also out after suffering a right ankle sprain on Friday in Indiana, the former C's forward is expected to miss at least four weeks.
The Celtics trailed by nine in the first quarter before outscoring the Hornets 33-17 in the second to take a 58-43 advantage into halftime. Boston would use a 40-point third period to push their lead to 30, the largest of the night.

"The last two games, moving the ball has been good," coach Brad Stevens said. "Hopefully we can play defense like we did tonight more often."

Charlotte led 18-9 in the first quarter but quickly surrendered their lead once Boston caught fire from behind the arc, hitting 10 first half 3's with the Hornets just making 4-of-13 3-pointers and turning the ball over nine times that were converted into eight Celtics' points.
In the end, Boston nailed 21 from 3-point range and Charlotte was held to 10-of-31 (32.3%) from behind the arc with 17 total turnovers.
The Celtics are 2-2 on their seven-game home-stand and they'll host the Eastern Conference leading Philadelphia 76ers (34-16) on Tuesday night. TNT will have the tip-off at 7:30 PM EST.

Boston shot 45.7% from the floor and 38.9% from 3, they also assisted 29 times on 43 made baskets, while only committing six turnovers. The Celtics' starting backcourt of Kemba Walker and Marcus Smart combined for 24 points on 9-of-20 shooting and 6-of-16 on 3's and 10 dimes.
Joel Pavón
Follow @Joe1_CSP