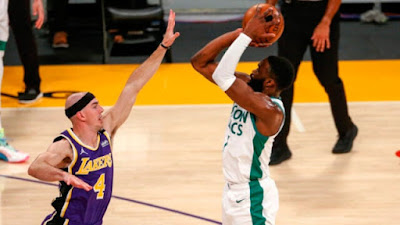 It wasn't the prettiest of fourth quarters, as the Celtics blew most of their 27-point lead before some of the starters had to come back in the final 1:50 to hold off the Los Angeles Lakers, 121-113 at Staples Center Thursday night.
Jaylen Brown ended up scoring four of his game-high 40 points in a span of 30 seconds once he re-entered the game late in the final frame. The All-Star wing went 17-of-20 from the field (3-of-5 from deep) to become the first player in franchise history to score at least 40 while shooting a ridiculous 85% clip since the NBA merger over 40 years ago.
Brown hit 13 of his first 14 shots out of the gate while missing a half-court heave before halftime and coming up two points shy of his career-high to lead the Celtics to their fifth straight win, despite an embarrassing finish.

"The Celtics-Lakers matchup is a matchup that kids dream about, so regardless of who's on the floor, I'm excited to play," Brown said in his postgame presser. "Having that energy with those Lakers fans back in the arena, it feels good to get a win."

Boston led 113-86 with seven minutes to play when coach Brad Stevens decided to pull his starters. But the Lakers used a 24-2 run that forced Brown and Marcus Smart (15 points, six rebounds) to check back into the game.
Brown immediately made a driving floater through some contact and a nailed a three-foot jumper with 32 seconds left to stop the Lakers' late-game rally and split the season series 1-1.
Payton Pritchard led the bench with 15 points, seven rebounds, while Jayson Tatum and Tristan Thompson each finished with 14 points and five assists respectively to lead the Celtics into a tie for the fourth best record in the East with the Atlanta Hawks at 30-26.
Robert Williams III sat out with a sore left knee and Evan Fournier missed his fifth straight game due to being in heath and safety protocol.
Talen Horton-Tucker scored a team-high 19 points to go along with seven rebounds and seven assists. Marc Gasol ended up with 18 points on 7-of-10 from the floor and 4-of-6 from 3-point range, while Ben McLemore added 17 points for the 34-22 Lakers, who were without LeBron James, Anthony Davis, Andre Drummond and Markieff Morris.
The Celtics never trailed in this one despite committing 21 turnovers and Los Angeles' bench outscoring Boston's second unit 69-26.

"We have a tendency to be loose with the ball, and we've got to stop that," Stevens said. "It'll bite us in time. You can't keep playing like that and expect to win."

The Lakers came in as the league's best defensive team but couldn't stop the Celtics from hitting 56.5% of their shots, as Boston took a 14-point lead into intermission and Brown netted 21 rather easily in the first half.
The Celtics return home to host the Golden State Warriors (28-28) on Saturday night after a sweep of their three-game mini west road trip and have now won eight of their last 11. ABC will have the tip-off from TD Garden beginning at 8:30 PM EST.