Jabari Parker on joining the Celtics: 'They just do things the right way' 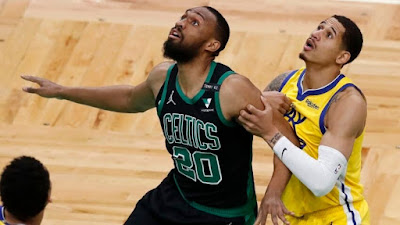 To say Jabari Parker is excited to be a Celtic is an understatement, after playing a total of 27 minutes for the Sacramento Kings this season in three total games.
The veteran forward was waived late last month and the opportunity to come sign with Boston was too good to pass up for both player and organization. Parker made his Celtics debut less than 24 hours after a two-year deal was finalized, scoring 11 points on 5-of-6 shooting in 16 minutes off the bench in the team's 119-114 win over the Golden State Warriors Saturday night.
Brad Stevens was asked about Parker making an impact not just for the remainder of this season but next year as well prior to the Celtics tip-off against the Chicago Bulls Monday.

"We saw it as an opportunity to not only sign a guy for the rest of the season but also next year," Stevens said in his pregame presser. "We want to do our part to certainly make our team better and in certain situations and certain matchups, especially as the season wanes here. But also to help him get his groove back."

The former No. 2 pick from the 2014 draft had his $6.5 million team option was picked up by the Kings in the offseason, Parker was never used and didn't seem like he was ever in coach Luke Walton's plans.
However, Parker's agent and Danny Ainge were in talks within the week he became a free agent working on the layout of a possible contract that eventually worked out.

"Most importantly, I've just been a fan of the Boston Celtics," Parker said in his introductory conference with the press Monday afternoon. "They just do things the right way, as far as like the teamwork, the hard work, and preparation. And hopefully I can be integrated and rub off on those guys as far as their work ethic and their habits."

Parker, who finished with eight points off the bench in the Celtics' 102-96 home loss to the Bulls, says he already had a relationship with Ainge and Jayson Tatum -- also a former Duke star.

"Jayson, I met him after my third season, and I came back to school, got a chance to work out with him," Parker said. "Got a chance to workout with (former Duke assistant coach) Jeff Capel who was his shooting coach. And then when Danny Ainge, we always stayed somewhat close, especially during the time where I was getting drafted, so that was a good familiarity that I have those guys here with the Celtics."

Stevens spoke about his versatility and how the Celtics can use him at multiple positions depending on the different types of lineups. In two games played, it's clear that Parker will be very much helpful for the final stretch of the regular season and what they hope is another deep playoff run.

"I certainly have always been a fan of his game — we certainly all have," Stevens said on Monday. "He's been through some tough times with regard to the injuries and with regard to him playing less, whether Chicago, Sacramento or Atlanta, not quite getting the same opportunity.
"He's a guy that can score, he's a guy that's got shiftiness in one-on-one matchups in the post and mid-post. He's great on the baseline, and there's ways he has to improve to play in the most meaningful games and the most meaningful times. But he's a good guy, good worker, he’s excited to be here, and we’re excited that he chose to come here."