Jaylen Brown listed as doubtful vs. Suns with shoulder injury 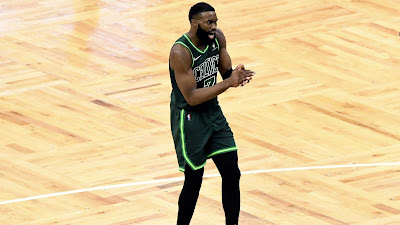 Jaylen Brown could end up on the injury report for his second stint in less than a week for the Celtics just as the team was on the verge of getting healthy.
The All-Star guard has been listed as doubtful ahead of Thursday's matchup against the Phoenix Suns at TD Garden with a shoulder injury.


Celtics president of basketball operation Danny Ainge made his weekly appearance on 98.5 The Sports Hub's "Toucher and Rich" and gave an update on Brown's left shoulder bursitis, which was sustained in Monday night's loss to the Chicago Bulls.

“Yeah, I don't know for sure," Ainge said Thursday morning. "It looked like it was better yesterday, but it was just sore. I could see during the broadcast the other night that his shoulder was bothering him, and he made a move and he's not sure if it’s just if he got hit or just stretched it out. But he’ll be alright in the next few days in my opinion.

"I'm not sure when exactly, but it was still sore yesterday. Hopefully he's feeling better today."

Brown missed Saturday night's win over the Golden State Warriors with a non-COVID related illness and has sat out a few other games due to knee tendonitis this season.
While Evan Fournier could return from being in the league's health and safety protocol by this weekend at the earliest, Robert Williams will miss his fourth straight game with a sore left knee.
The Celtics at 31-27 have won six of their last seven games, as they look to rebound against one of the league's best teams in the Suns (42-16).
Joel Pavón
Follow @Joe1_CSP