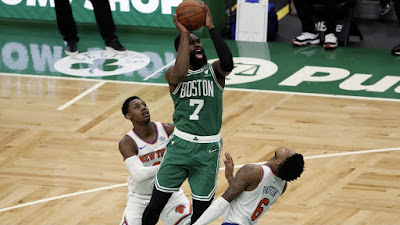 The Celtics for a second night in a row committed 20 turnovers, but were able to hold on Wednesday and beat the New York Knicks at TD Garden 101-99.
Jaylen Brown led all scorers with 32 points on 12-of-26 shooting to go along with 10 rebounds, while Jayson Tatum, who had eight turnovers, recorded a double-double of his own with 25 points and 10 rebounds to lead the Celtics back to a .500 record of 26-26.
After a 10-point loss to the Philadelphia 76ers, Brown said he spoke to Tatum on not worrying about "outside noise."

"I just said, 'Let's just come out and play basketball. Be aggressive. Be our best version of ourselves,' " said Brown in his postgame presser. "... I just needed to be Jaylen. And our team played great tonight."

Marcus Smart scored 14 of his 17 points in the fourth quarter and also dished out nine assists, as Kemba Walker sat out due to rest left knee management.
After missing the last 12 games, Tristan Thompson returned from being in the league's health and safety protocol to provide some muscle off the bench, scoring seven points, grabbing eight rebounds and blocking three shots in 22 minutes, to finish with a team-high a plus-24.
RJ Barrett had 29 points, including going 6-of-6 from 3-point range and Julius Randle added 22 points and nine rebounds for the Knicks (25-27) that have lost two straight and five of their last six.
Boston and New York were tied for the seventh seed prior to tip-off, as both teams didn't shoot particularly well but it was a close game throughout which featured eight ties and 17 lead changes.
The Celtics trailed by seven in the final frame before using a 7-0 run to pull ahead with an 87-85 advantage. Following a Brown layup to make it 93-90, Barrett tied it up with a made 3 before Smart responded with one from deep with 36.4 seconds left to play.
Boston hit five of their final six free throw attempts to ice the game despite Elfrid Payton connecting on a 3-pointer that kept the Knicks alive with 6.3 seconds remaining.

"That was what we're used to — kind of a grind-out Celtic win, which is what we've been about when we're at our best," said coach Brad Stevens about his team's physical play.

The Knicks were 8-of-16 from deep in the first half before they jumped out to a 11-3 run at the start of the third quarter after the Celtics took a 47-46 lead into intermission. Neither team led by any more than seven points.
Boston is 3-3 in their last six games at the Garden and they'll wrap-up their current homestand on Friday when the 13-39 Minnesota Timberwolves come into town. Tip-off is at 7:30 PM EST.