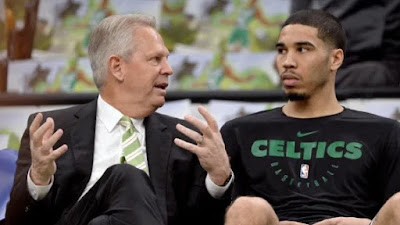 Jayson Tatum and the Celtics may have turned a corner on the season after former champion Kendrick Perkins called out the All-Star forward following a disappointing loss to the Philadelphia 76ers last week.
Boston, who is currently on a four-game win streak, hasn't lost a game since the ex-Celtics big man tweeted out his comments towards Tatum and apparently the two talked it out, according to Perkins.
Tatum reached out to Perk and they discussed the criticism, while Celtics president of basketball operations Danny Ainge was all for it.

"I love the fact that Jayson Tatum picked up the phone and called Perk. That's good that they have that connection," Ainge said during his weekly appearance on 98.5 The Sports Hub's "Toucher and Rich" Thursday morning. "I know that Perk only cares for Jayson's success. I think that there's players available (to talk), and I also know that players in our league now, they're listening to other players."

Ainge loved that Perkins was also willing to talk and that Tatum took the approach he did to being criticized, saying "you want anybody that's a positive influence" when it comes to this 2020-21 Celtics roster.

"(Tatum) will seek out those who can help him," Ainge said. "Sounds like he was seeking out Perk and wanted genuine feedback from what Perk was saying about him that he didn't like."

Tatum is averaging 34.5 points in the last four games, including an historic 53-point career-high performance against the Minnesota Timberwolves on Friday and earned Eastern Conference Player of the Week honors.
The Celtics turned around and beat the Denver Nuggets in a blowout after a 14-point rally in the third and into the fourth quarter to end the game on a 40-8 run. Tatum hit a dagger three that ended up being the game-winner against the Portland Trail Blazers with 8.6 seconds left and he finished with a team-high 32 points.
After the Celtics victory over the Blazers, Tatum revealed that he's still dealing with lasting effects of COVID-19. Though he said that he's "close" to being 100-percent, the young forward has been using an inhaler before games to help his breathing.
Despite many wanting to give Perkins credit for the Celtics and Tatum's recent turnaround, Ainge made sure to make it clear that Perk was not the sole reason for the 23-year-old's play as of late, saying, "Jayson Tatum for the last 12 games, not since the Sixers game, has been on a tear. He's been playing unbelievable basketball."

"I think Jayson is wise and so is Jaylen (Brown). They're wise beyond their years in my opinion," Ainge later said. "Both those guys know who's blowing smoke and who is honest and good feedback. So, I'm certainly not dismissing the feedback that players receive, but I'm also not giving them all the credit for the players' play because Jayson Tatum has been on a roll for four years and he's had some downtimes."

Tatum and the Celtics look to extend their win streak and sweep their current three-game mini road trip out west when they take on the LeBron James and Anthony Davis-less Los Angeles Lakers Thursday night.
Joel Pavón
Follow @Joe1_CSP