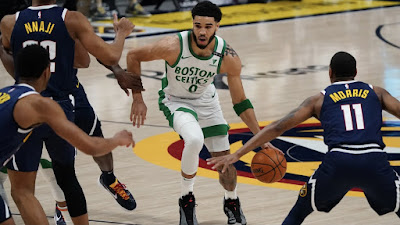 The Celtics hadn't won a Sunday matinee this season and it didn't look like that was going to change at Ball Arena before a 14-point rally turned into a 105-87 blowout win over the Denver Nuggets.
Boston stopped the hottest team in the NBA by using a 31-3 run to snap the Nuggets' eight-game win streak on Sunday.

"We just needed something to get us going," coach Brad Stevens said in his postgame comments. "You know, I thought we were close to going the other way there when it was 76-62."

The Celtics, already playing without Evan Fournier (fourth straight), have won five of their last six after Jayson Tatum (illness) and Jaylen Brown (knee) were both listed as questionable hours prior to tip-off.
Tatum, who was coming off a with a career-high 53-point performance against the Minnesota Timberwolves on Friday, finished with 28 points and 10 rebounds, while Brown netted 20.

"I think we just picked up the intensity," Tatum said during his postgame presser. "I think we communicated a lot better. We started switching a little bit more. I think that helped us out, too.
"That was big. Because we could have let it get away from us."

Marcus Smart and Kemba Walker each scored 14 points respectively for the Celtics who are now 28-26 on the year.
Michael Porter Jr. led the Nuggets (34-19), who had won 17 of their last 20, with 22 points, 11 rebounds, while Nikola Jokic recorded a triple-double of 17 points, 10 rebounds and 11 assists.
The Celtics trailed 79-65 late in the third quarter before they used a 10-0 run to end the period and the Nuggets were only ahead 79-74 entering the final frame.
Boston scored six answered points to start the fourth and Romeo Langford hit a pair of free throws to give the C's their first lead with 10:32 left to play.
Denver would score only eight points the rest of the way, as the Celtics outscored the Nuggets 40-8 to finish the game; a run that began at the 1:32 mark in the third period to lead by as many as 18. It was a complete turnaround after a 16-point first quarter and a 6-of-25 start from the field.
While that makes it two games in a row where the Celtics have had to rally back from a double-digit deficit to win, Tatum knows that there's still work to be down with less than 20 regular season games remaining.

"It's certainly going in the right direction," he said. "We still have some things to improve on, but hopefully we can just continue to build off this."

The Celtics continue their three-game mini road trip on Tuesday when they face the Portland Trail Blazers (31-21). TNT will have the tip-off at 10 PM EST.