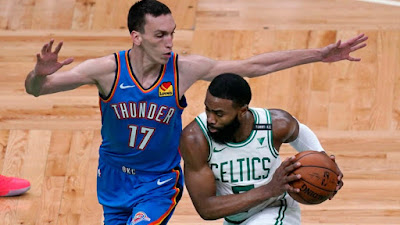 Just when it couldn't get any worse for the Celtics, they found a way to lose 119-115 at TD Garden to a Oklahoma City Thunder team that was riding a 14-game skid heading into Tuesday night.
Playing without Jayson Tatum (ankle), Kemba Walker (oblique) and or Robert Williams (knee), Jaylen Brown led the way with 39 points on 13-of-26 shooting and 11 rebounds for the Celtics -- who have lost four of their last five.
Rookie Payton Pritchard finished with a career-high 28 points, while shooting 9-of-16 from the field and Marcus Smart added 14 points, six assists.
Lu Dort scored 24 points, Darius Bazley recorded a double-double of 21 points and 10 rebounds for the 21-41 Thunder. Isaiah Roby and Ty Jerome each chipped in 15 points apiece off the bench to help avoid tying a franchise record of 15 straight losses.

"(Expletive), we gotta play with more of a sense of urgency," Brown said during his postgame presser. "Tonight, I feel like we didn't have the sense of urgency that we needed across the board, and a team that has some young, talented players came ready to play, and we got beat."

Despite Oklahoma City not winning a game since March 31 and committing 27 turnovers against the Celtics, the Thunder hit 13-of-30 from behind the arc and overall made 48.1% of their shots.
While the loss doesn't bode well for the Celtics -- now 32-30 -- they're still the sixth seed in a tight Eastern Conference playoff race. Brown hopes that this will light a fire under his teammates with 10 games left in the regular season.

The Thunder had an 11-point lead; the largest of the game in the third quarter before the Celtics erased it to take a 3-point advantage, their first and only one of the night. Oklahoma once again were up the same margin 106-95 with 2:25 left to play.
The Celtics trailed 110-100 before they used a 9-2 run to get within three (112-109) following a pair of made free throws by Pritchard with 30.8 seconds remaining, before Theo Maledon was fouled and hit two of his own from the charity stripe.
Brown was fouled on a layup attempt and hit both of his free throws. Oklahoma City then broke the Celtics' full-court press, as Roby dunked it to make it 116-111 with 16.8 left on the clock.
A missed Dort free throw and a made Brown corner 3 gave Boston some hope, down 117-114, but Evan Fournier (11 points, seven rebounds and five steals) was fouled and attempted to miss the second of two throws after hitting the first one before Roby grabbed the rebound to hand the Celtics their third straight loss.
The Celtics host the Charlotte Hornets (30-31) on a second night of a back-to-back Wednesday, they'll look to avenge a blowout loss from three days ago. Tip-off is at 7:30 PM EST.

Boston shot 42.3% from the floor and were 11-of-49 from deep, with Brown and Pritchard combining for 8-of-21 on made 3's. The Celtics outscored the Thunder 52-46 in the paint but were out-rebounded 51-39 and coughed up 14 turnovers that were converted into 29 points for Oklahoma City.