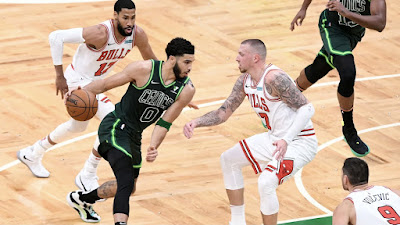 Riding a season-high six-game win streak, the Celtics welcomed Daniel Theis back to Boston in a disappointing 102-96 loss to the Chicago Bulls at TD Garden Monday night.
With Marcus Smart and Kemba Walker both out due to a non-COVID illness, the Celtics needed to rely on their two stars for scoring along with their second-unit. Surrendering 17 turnovers, Boston gave the Bulls too many opportunities, while their physicality took a toll on the C's offense, especially when they attacked the paint.

"It was a physical game, a tough game. I give those guys a lot of credit. [Garrett]Temple, [Patrick] Williams, [Daniel]Theis, and Vuvevic -- they were all really physical and made it very difficult for our drives and on our rim attacks," said coach Brad Stevens after the loss.

Jaylen Brown led the Celtics in scoring with 23 points (10-of-15 from the field), while Tatum notched his first-career triple-double -- 14 points, 13 rebounds and 10 assists -- despite shooting a disastrous 3-of-17 from the field. Payton Pritchard added 14 points off the bench with Jabari Parker scoring eight points in his second game with the team.
Celtics' trade target Nikola Vucevic dominated all night, scoring 29 points on 13-for-23 from the field, with Coby White finishing with 19 points, as Zack Lavine was sidelined after entering the league's health and safety protocols. Garrett Temple and Thaddeus Young also tallied 13 points each for the 24-33 Bulls.
The Celtics came out the gate strong led by Brown’s team-high 13 points, as he made all six of his shot attempts. Despite the team shooting 13-19 from the field and 4-6 from deep in the first quarter, Boston only held a six point advantage after coughing up six turnovers.
Tatum came out cold in the first half, scoring only three points after making one of his seven field goals. Amid his offensive struggles, Tatum found other ways to integrate himself into the offense, dishing out five assists and grabbing seven boards after two quarters.
Looking back at his difficult shooting night, Tatum praised the Bulls’ defense for slowing him down.

"I gotta give them credit. They did a great job defending, showing help, just making it tough," said Tatum during his postgame presser.

Chicago struggled from the field in the first-half (38.3%), but with Vucevic's 17 first-half points, the Bulls kept it close. Holding only a six-point lead in the first two quarters, the Celtics knew they would need more production from Tatum and others had to step up.
In need of a spark on the offensive end, Tristan Thomson kicked off the Celtics' scoring converting an and-1 opportunity. The Celtics' offense remained stagnant in the second quarter outside of Brown's seven points, as the Bulls took advantage late. With plenty of second-chance opportunities, the Bulls' big men dominated the Celtics contributing to a 15-4 scoring run to end the third quarter.
Down eight heading into the final quarter, Tatum kicked off the fourth with a big 3-pointer on their first possession. With both Walker and Smart out, Brad Stevens went deep into his bench, giving Tremont Waters some key fourth-quarter minutes. Waters took advantage of his opportunity, scoring nine points off the bench in the quarter-- something Stevens acknowledged after the game.

"Our guys fought. They gave ourselves a chance. We got some good performances by guys that haven't played a lot. Tremont Waters came in and gave us a real lift," said Stevens in his postgame comments.

Tatum continued to struggle from the field, but set up his teammates during his 10 -assist effort. After finding Jabari Parker for an alley-oop slam, Tatum then found Thompson in the paint with under eight minutes to play. Later in the quarter, Tatum sprinting to recover a loose jump ball, earned a trip at the line, converting both free-throws. Tatum's hustle created some energy for the team, and the Celtics responded.
With less than five minutes to play, the Celtics were in need of some big shots down the stretch down six points. With no hesitation, Payton Pritchard drained a three on the wing off a Thompson assist to cut the deficit down to only three. After making a stop on the other end, Brown dribbled up the court and knocked down a clutch pull-up 3-pointer to tie the game up 90-90.
The Bulls put an end to the Celtics' late push as turnovers on back-to-back possessions put Chicago in control of the lead -- never looking back. Boston fought to the very end, but turnovers and second-chance opportunities turned out to be their undoing on a night where they were missing three of their starters.

"We could have won. We had chances. But it's hard when we're missing Kemba, Smart, and Fournier," said Tatum.

After an impressive six-game stretch, the Celtics finally came back to earth and were outplayed by the 10th-seeded Bulls without their starting back-court. With the loss, Boston are now tied for fifth in the East with the Knicks, and have a few tough matchups coming up. Likely without Walker for at least one of their back-to-backs against the Nets and Suns, the Celtics will certainly need more production from Tatum and their second-unit.
With an opportunity to jump back up the standings, the Celtics hope to have some of their starters available on Thursday against the Suns at TD Garden. Tip-off is scheduled for 7:00 PM and is available to stream on NBC Sports-- Boston.

The Celtics were outrebounded 40-39, and were dominated on the offensive glass allowing nine rebounds to their three. Boston shot better from the field (46.8%) compared to the Bulls' 45.6%, and outshot Chicago 40% to 34.4% from deep.
The Celtics also finished with more turnovers (17-12), as the Bulls finished with 30 assists compared to Boston's 21.
Ian Carrano
Follow @IC_Sports1