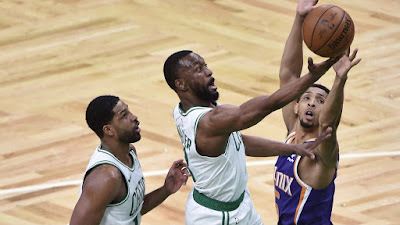 Despite an encouraging 99-86 victory over the Suns Thursday night at TD Garden, the Celtics and the city of Boston were delivered some devastating news after the game. Following a workout, Terrence Clarke was pronounced dead after being involved in a car crash in Los Angeles just hours prior.
With the report being confirmed as true, Celtics players and coaches were visibly affected by the tragic death of a promising young player, who was not only a Boston native but had recently declared for the NBA Draft following his freshman year at Kentucky. Brad Stevens, in shock of the news, was unable to comment much on the game.

"I'm not sure how much I want to talk about the game. When you consider it a Boston kid, I don't know what's real yet. I have not heard anything confirmed, but I've read what you've read. Those kids are important to us here, and I never met him. I know my son looks up to him, hard to talk about a basketball game, with even the idea that that's floating out there."

Knowing how high his potential was and pointing out to his close relationship with Clarke, Walker was stunned to hear about his tragic death.

"He was a very good kid. Always smiling, always energetic and he was about to get his opportunity. It’s a tough time. That’s really tough news to hear. Don't even know what to say. It's kind of mind-boggling," said Walker in his postgame presser.

Outside of the unfortunate news, the Celtics were in good spirits during the game, responding well to Monday's loss to the Bulls. Led by Walker's 32 points (11-of-17 shooting), the Celtics got a much-needed bounce-back win against a difficult Suns team. Returning to the lineup after missing Boston's previous game due to an illness, Marcus Smart knew how important the win against the second-ranked team in the West was.

"Coming into this game we knew it was going to be a dog fight. These guys come out and they play hard. We all know, everybody around the league knows it and you gotta respect those guys. So you gotta come out and battle the way we did after the loss especially having those two days off coming back against this type of team and getting this type of win. It means a lot. We weren’t perfect in the game, but we stuck with it and we stayed together," said Smart in a postgame interview with Amanda Pflugrad.

Jayson Tatum continued to struggle, scoring only 15 points (3-of-17) on the night and adding 11 boards. Payton Pritchard brought some scoring off the bench finishing with 10 points, while Tristian Thompson was active on the glass with his team-high 12 rebounds.
Dealing with foul trouble, Devin Booker was limited to only 15 points, which forced others to step up for the Suns. Chris Paul's 22 point- near triple double included eight rebounds and eight assists-- which kept the Suns competitive late. Making an impact on the defensive end, Mikal Bridges also delivered offensively, adding 15 points, but struggled shooting from deep (1-of-9).
With Jaylen Brown nursing a shoulder injury and Tatum struggling from the field all night, the Celtics needed someone to step up against the second place Suns (42-17). In All-Star form, Walker's explosive dribble moves, step-backs, and difficult finishes were on display all night. Scoring 27 points through three quarters, Walker carried the load offensively for the Celtics, particularly in the first quarter, where he tallied 11 points, while shooting a perfect 4-of-4 from the field-including making all three of his shots from deep.
Walker's scoring fueled Boston's 14-6 run during the first half of the quarter, with the Celtics' defense holding Devin Booker to only five points-- shooting 2-of-7 from the floor. Struggling with inconsistency all season, Walker's teammates were happy to see him thrive in a game his team needed him most.

"It was exhilarating. Kemba's been struggling coming off that injury. He's been hearing a lot of backlash from it. I'm just proud of the way he’s responded. He's come in every day, he gets his work in, doesn't let anything faze him. He's very professional and he comes in and it pays off so I'm very happy. I'm very proud of him. I’m excited that he's finally getting his legs back under him."

Walker's aggressiveness continued in the second quarter, as he added another eight points and had plenty of highlight-reel plays. Taking a crossover over a Thompson screen, Walker dribbled left, splitting Bridges and Deandre Ayton at the top of the key. Attacking the basket, Walker floated to the right, easily laying it in off the glass.
Despite the Celtics' 14 turnovers, they still held a sizable 16-point lead at the half. After Aaron Nesmith's two big 3-pointers in the quarter, the Celtics were in good position heading into the second half. Forcing eight turnovers alone in the second quarter and holding the Suns to 3-16 shooting from deep in the first half, the Celtics' defense looked more engaged than it was a few nights ago-- something Walker saw from his team all night.

"We played well. We competed, we sustained. I think that was the most important thing. We just maintained our energy, maintained our composure throughout the entire game; even though some guys had tough nights," said Walker in a postgame interview with Chris Forsberg.

Coming off an impressive first-half, Walker dazzled in the third quarter with some highlight reel plays. Working around a Tristian Thompson screen, Walker dribbling left, drove to the basket, went straight into the body of DeAndre Ayton, and finished a tough layup falling backwards to extend Boston’s lead to 17 at the midway part of the third quarter. Having 20 turnovers going into the final quarter, the Celtics were fortunate to have a 12 point lead-- and in good position with Booker on the bench with five fouls.
The Celtics remained reliant on Walker during the key moments in the fourth, as he made some big plays-- setting up teammates and showing great effort on defense.
Up 13, Walker in isolation on the right wing drew a foul on Jevon Carter on a 3-pointer to extend the lead to 88-72. While the Celtics looked to be in control, the Suns wouldn't go away staying in striking distance. However like he did all game, Walker took back control of the game late with winning plays on back to back possessions.
After knocking down an overhead awkward 3-point jumper over Cameron Johnson on the left wing, Walker followed it up drawing a charge to foul out Booker with less than five minutes to play. While much of the Celtics' rotation struggled scoring, Walker’s offensive outburst was certainly encouraging at this point in the season.
With the win, the Celtics at 32-27 moved back into a tie with the Hawks for fifth place in the East. Only a half a game behind the Knicks for the fourth seed, Friday's matchup against the Nets (39-20) on the road will be crucial to their climb up the standings during the final stretch of the season. ESPN will have the tip-off at 7:30 PM.


The Celtics outshot the Suns 42.9% to 40.9% from the field, but were dominated in the paint (46-30). Boston made 12 three pointers compared to the Suns' six, but surrendered 20 turnovers, while Phoenix finished with 17 turnovers.
The Celtics out-rebounded the Phoenix 48-38, and dominated at the free-throw line, making 21-of-24 attempts, while the Suns made eight of their only nine free throw attempts.
Ian Carrano
Follow @IC_Sports1