Robert Williams 'getting way more comfortable' after near triple-double vs. Rockets 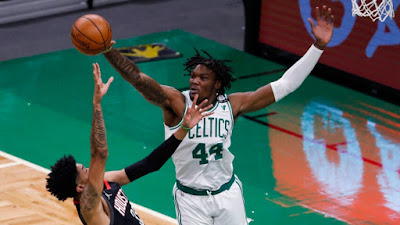 Robert Williams III made his return to the Celtics lineup with a vengeance on Friday night in a much needed 118-102 win over the Rockets at TD Garden.
After sitting out with an illness in the team's loss to the Mavericks Wednesday, Williams had no issues accepting the challenge against one of the up and coming big man in Christian Wood, recording a career-high in points -- 20 points on a perfect 9-of-9 from the field -- and in assists with eight to go along with nine rebounds for a near triple-double.

"His passing, his effort, and when he's at his best, his interior defense. When we've been good, and he's been good, those have stood out," Brad Stevens said in his postgame presser, when asked about Williams' performance against Houston.

In the four games Williams has played as a starter since the trade of Daniel Theis, the Celtics are 3-1 and he's putting up averages of 10.8 points, 10.5 rebounds, and 5.3 assists over 27.8 minutes per contest.

"I'm getting way more comfortable with the more minutes I've played. And if it stays that way, I'm going to get better," said Williams of his recent increase of playing time.

The Celtics big man is also averaging about four offensive boards a night since becoming a starter, which has a been huge when it comes to Williams' passing ability being on display over the past week.

"I think that every good big man that passes in this league does that (kick out to the perimeter.) Rob, obviously, has been a good passer from day one," said Stevens of Williams being a great passer.

Williams became only the third center in NBA history behind Wilt Chamberlain and Nikola Jokic to finish with a stat line of 20 points, eight rebounds and eight assists without missing a single shot attempt (per Stat Muse); which has been real testament of the the Celtics center's hard work on both ends of the floor.

With Tristan Thompson still in health and safety protocol and no timetable on his return, it's safe to assume that Williams will be a permeant starter in Stevens' starting lineup for the foreseeable future.
The Celtics will look to use Friday night's win as a motivator against the Hornets tomorrow night and hopeful gain some momentum during the last few games of their homestand.
Joel Pavón
Follow @Joe1_CSP