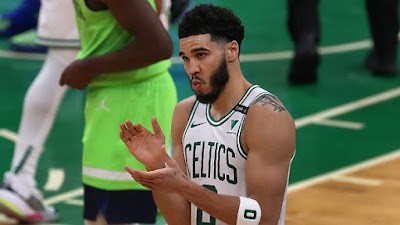 The Celtics are enjoying a three-game winning streak and they have Jayson Tatum to thank after pulling off a few comeback victories over the last seven days.
The NBA announced Monday that the two-time All-Star has been named Eastern Conference Player of the Week for games played between April 5 - April 11, joining Los Angeles Clippers' forward Paul George to receive the honors for the Western Conference.

Tatum's average of 31.5 points (48% shooting), 8.5 rebounds and 3.8 assists led Boston to a 3-1 week. The Celtics forward exploded for a career-high 53 points and 10 rebounds in an overtime win over the Minnesota Timberwolves, then scored 14 of his 28 points in the fourth quarter and grabbed 10 boards in the team's rally and blowout over the Denver Nuggets on Sunday.
The 23-year-old also made Celtics history this past week, becoming the youngest player to score 50 points in a game passing Larry Bird's record. Tatum has now recorded at least 25 points and 10 rebounds in three consecutive games, a feat that has not been done in Boston since Paul Pierce back in 2003.
Joel Pavón
Follow @Joe1_CSP