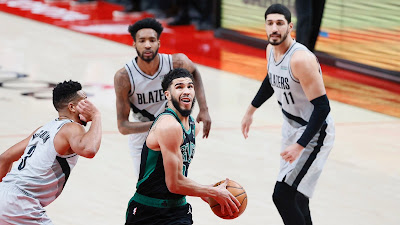 Combining for 81 points over his last two games, Jayson Tatum once again caught fire in the second half to push the Celtics to a much-needed 116-115 win over the Portland Trail Blazers Tuesday night.
Extending their winning streak to four games, Boston led by Tatum's team-high 32 points, held off the Trail Blazers in a nail-biter to jump into fifth place in the Eastern Conference at 29-26.
With the bench scoring only 10 points, the Celtics' starters did most of the damage offensively, led by their three best players who all scored at least 20 points. Jaylen Brown finished with 24 points (9-of-21 shooting), Tatum was an efficient 10-of-17 from the field, while Kemba Walker adding 21 points on the night.
The Blazers (31-23) got production across the board as Damian Lillard's 28 points were crucial down the stretch combined with Norman Powell's 20 points. Carmelo Anthony provided a big spark off the bench scoring 25 points on 10-of-15 shooting.

"I think our spirit is where everybody else's is after four games. We're not excited, we're not complacent, we're not content with it. It's a start-- beginning of where we know we have to do. We dug ourselves a hole. We have to continue to fight, but it's encouraging," said Marcus Smart (13 points, seven assists) during his postgame presser.

Scoring 29 points per game on 50% shooting alone in the month of April, Brad Stevens has taken notice of Tatum getting back into his groove offensively-- something he recognized late last season.

"Tatum's done that here for this stretch. This is about the time, number of games, where last year he started taking off and you can kind of see that in the last so many weeks," said coach Stevens. "He's really in a rhythm of knowing what he wants to do on a given possession and where those opportunities are going to be coming from."

In an entertaining final frame, the Celtics and Blazers traded a series of buckets late. With Boston in need of a basket with under a minute to play, Tatum delivered, driving to the lane, drawing a foul, and draining two key free-throws to regain the lead at 113-112. After making a key stop on the defensive end, the Celtics going the other way made sure to put the ball into their playmaker's hands.
Shot clock running out, Tatum, like he's done many times before, calm and collected, dribbled to the top of the arc, sidestepped Lillard and drained a clutch 3-pointer to extend Boston's lead to 116-112 with only 7.8 seconds remaining.
While his clutch shot looked to have sealed the deal, Powell had other plans. Off the inbound, Powell launched a deep 3-pointer near half-court and knocked it down to cut the lead to only one with just over three seconds to play.
Marcus Smart was fouled intentionally on the inbound out of the Celtics' final timeout, the Blazers got another opportunity for a full-court heave from Lillard after Smart missed both free-throws (purposely missed the second).
Lillard's contested heave was off the mark, and Boston left Portland with their win streak alive and most importantly-- with some confidence going into the final 17 games of the regular season.

"I just like the way that we're playing. Every game is important right now and we know it's kind of coming down to the stretch. Obviously we want to win but I think for myself, us playing the right way and feeling good about ourselves, we're not gonna win every game, but I think we're playing the right way and for sure trending in the right direction," said Tatum in his postgame comments.

Both teams started strong offensively, as Robert Williams led the Celtics in scoring with six points in the first four minutes. After trading baskets early, the Blazers jumped out to a quick 10-0 run at around the 8 minute mark to take a seven point advantage.
The Celtics responded, with Walker knocking down three 3-pointers and converting all three free-throws after being fouled on a 3-point attempt. Staying aggressive early, Walker's 12 points led all Celtics in scoring, but he stayed quiet the rest of the game, scoring only seven points in the second half.
The second quarter remained competitive, with both teams producing offensively. Brown was the story of the second quarter for the Celtics, scoring nine points to head into the break with 13. Powell and Anthony combined for 27 points in the first-half alone with C.J McCollum and Lillard both struggling from the field..
Tatum put a slow first half (seven points) behind him and took control in the third quarter. The Blazers got out to a quick 10-2 run early in the third, but after a Tatum layup out of the timeout, the Celtics were back in a rhythm.
Scoring 17 points alone in the quarter, Tatum took over offensively making six of his eight shots after draining another stepback-3. Adding an additional seven points from Brown points in the period, the Celtics' All-Star duo helped push their team to a five-point lead after three quarters.
While the fourth quarter was defined by star play, Tatum's offensive explosion in the second half stood out from the rest. Marking his 14th 30-point game of the season, Tatum's offensive emergence is something his teammates know will be important for the team heading into the final stretch of the season.

"The way he's been playing these last couple games it’s just proof in itself. We're going to need that from him and he knows it," said Smart. "We all see it. We're all witnessing his growth continuing to go up and his basketball IQ. As he continues to learn the game and continues to find a way to prove himself. Brad [Stevens] hit it on the head. Right around this time last year around the same point, so you can definitely see those similarities," added Smart.

The Celtics hope to extend their win streak during their West Coast trip against the rival Los Angeles Lakers (34-21) on Thursday night at 10:00 pm. The game will be available to stream on TNT and on NBC Sports-Boston.

The Blazers outshot the Celtics 47.8% to 46.7% from the field, but the Celtics shot better from beyond the arc (42.9% to 39.5%). Boston also forced 14 turnovers and dominated Portland in the paint outscoring them 50-28 in that category. Both teams finished with 46 boards a piece.
Ian Carrano
Follow @IC_Sports1