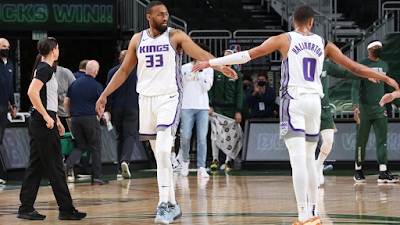 The Celtics have signed free agent veteran forward Jabari Parker, per Shams Charania of The Athletic that first reported the move Friday night.
Boston will waive Moritz Wagner, who was acquired back at the NBA trade deadline as part of the deal that sent Daniel Theis to the Chicago Bulls, to create a roster spot for Parker

Jabari Parker -- the former No. 2 overall pick -- has agreed to a two-year deal with the Celtics, sources said. Parker, a career 14.8 points per game scorer, gives Boston some depth in frontcourt. https://t.co/MBe2PXC5Fu


According to Charania, the contract is a two-year deal that will carry into next season for the former No. 2 pick from the NBA 2014 draft.
Despite Parker not living up to those draft expectations, mostly due to suffering two ACL tears within the first three of his seven years in the league, he has career averages of 14.8 points (49% from the floor, 32% from deep) and 5.7 rebounds per game. During the first four seasons with the Bucks, he averaged 15.3 points, including scoring a career-high 20.1 points per contest in the 2016-17 campaign.
In 32 games played (23 starts) with the Atlanta Hawks last season, Parker averaged 15.0 points and 6.0 rebounds before being dealt to the Sacramento Kings at the trade deadline. He has since only played in nine games -- six in the bubble and three this season -- with averages of 5.6 points, 2.9 rebounds in 11.2 minutes, which was a significant drop in playing time from his 26.2 minutes given in Atlanta.
The Kings waived Parker back on March 25 and in a surprising move by Danny Ainge, the 6-foot-8 forward comes to Boston in hopes of providing some added frontcourt scoring off the bench.

After Jayson Tatum, the power forward depth chart wears a bit thin with Grant Williams (4.4 points) and Semi Ojeleye (4.9 points), who are both listed at 6-foot-6 and most likely Parker will have to compete with for minutes.
If anything, the Parker signing should have came a bit sooner, especially after the display from the Celtics' second unit against the Lakers, where they pretty much gave up most of 27-point lead that nearly cost them the game. The 26-year-old could have been a big help and there would not have been a need to have three starters come back in.
With the playoffs less than a month away, coach Brad Stevens will have plenty of time to experiment with Parker, Evan Fournier and other combinations off the bench before the Celtics (30-26) hopefully tighten up their rotation for a postseason run.