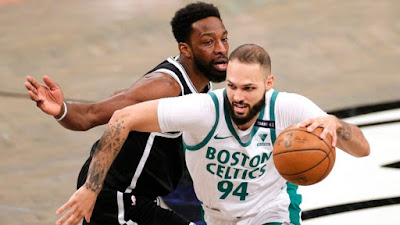 Evan Fournier made his return to the Celtics' lineup Friday night in the team's 109-104 loss against the Brooklyn Nets on the road.
While it was good to have the veteran guard re-join a shorthanded C's rotation, it would have been an even bigger help if Fournier scored more than just two points on 0-of-7 shooting -- which was similar to his 0-of-10 debut following being traded from the Orlando Magic last month.
Though Fournier has only played in five games since being acquired by Boston, the veteran guard is just happy to be back on the floor after a stint in the league's COVID-19 health and safety protocol.

"Obviously that's not how I wanted to play. You want to win every game you're in obviously, "Fournier said during his postgame press conference. "But I think it was really important for me to get that first game in, just get back out there. I'm going to be tired, but that's positive. That's good."

Fournier missed nine straight games just as he was starting to hit his stride in his last two outings scoring 23 and 17 respectively before landing in protocol. Still, Fournier, who played 22 minutes off the bench -- hit a pair of free throws, dished out five assists and grabbed two rebounds -- finished with a plus-five rating despite saying he rushed back to help re-adjust himself with his new teammates.

"I probably could have waited a few more days or a few more games to feel better, but I just got here and I need reps to play with the guys and really understand the system offensively and defensively," Fournier said. "So I only had two days of practice and for me, the most important thing is just being out there. It's going to be hard, obviously, but I have to fight through it and push through it because for me that’s the only way I’m going feel better at some point."

The Celtics have been very familiar with the coronavirus this season after Jayson Tatum, Robert Williams, Tristan Thompson and Romeo Langford have missed time due to testing positive. Tatum recently admitted that he uses an inhaler before games, something that the All-Star forward never needed prior to his bout with COVID-19.
Like Tatum, coach Brad Stevens admits that Fournier will likely struggle his first few games back, but is confident that he'll be back in the swing of things just like the two games prior to his positive COVID test.

"He's going to probably, very likely at least, going to struggle and we just don't have time to practice. He's got to play, he's got to get himself up to speed," Stevens said on his postgame presser. "That was a unique group there at the end when we were coming back with Jabari (Parker) and Evan. Not a lot of Celtics corporate knowledge, obviously five games and four games in between them. But I thought they did a lot of good things.
"Evan obviously couldn't make a shot…. But it is good to get him those minutes. I don't think he'll have many games like that."

Tatum noted that it's also up to the Celtics to help Fournier get comfortable and re-acclimated as well.

"His transition hasn't been just as smooth. It's our job to help him with that process," Tatum said on his postgame conference call.

Fournier will have an opportunity to bounce back on Sunday afternoon when the Celtics face the Charlotte Hornets at 1 PM EST on ESPN.