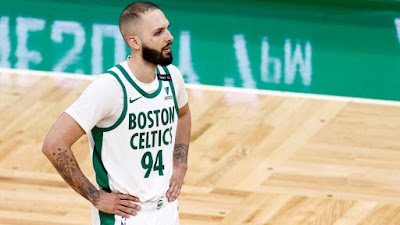 The Celtics will be without Evan Fournier on their three-game mini road-trip out west that tips off Sunday against the Denver Nuggets.
The veteran guard was placed in the league's health and safety protocol on Tuesday and coach Brad Stevens gave an update prior to the Celtics' win over the Minnesota Timberwolves. Fournier has missed the last three straight outings.
According to NBC Sports Boston's Chris Forsberg, the earliest that Fournier could make his return is April 17 against the Golden State Warriors at TD Garden.

Brad Stevens said Evan Fournier won’t travel on upcoming three-game road trip. That would make his earliest potential return April 17 and Brad didn’t say anything about beyond the trip.


While it's still unknown if Fournier has tested positive for COVID-19 or not, but he did post an update on social media about hopefully returning sooner rather than later.

Just want to take a moment to thank you all for the love and support over the last few days.
I can't wait to get back on the court and help my team win. ☘️

Fournier was placed into health and safety protocol just hours before the Celtics hosted the Philadelphia 76ers. He was looking like the player Danny Ainge hoped he traded for in his last two games played. Fournier scored 20 of his 23 points in the fourth quarter of the win over the Houston Rockets, including six straight 3-pointers made. He than followed that up with a 17-point performance in a blowout over the Charlotte Hornets.
The Celtics at 27-26, face the Nuggets, Trail Blazers and Lakers on their upcoming road trip.
Joel Pavón
Follow @Joe1_CSP