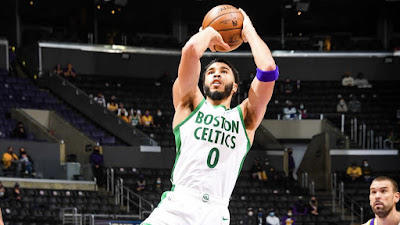 Jayson Tatum and the Celtics are on a roll sweeping the week at 4-0 and beating the Golden State Warriors at TD Garden for their sixth straight win and grab sole possession of the fourth seed.
The reigning Eastern Conference Player of the Week has made another case to win the honors again, as Boston had some impressive victories over the Denver Nuggets, Portland Trail Blazers and the short-handed Los Angeles Lakers on the road.
While Tatum continues to hit his stride, we take a look at the past seven days and what's on tap for next week for the surging C's, who are currently the hottest team in the NBA at 31-26.
Game of the Week: Celtics @ Portland -
The team's 116-115 win over the Trail Blazers was easily the best game of the week for the Celtics, who got an all-around performance from their top six players. All five starters scored in double-figures, including Marcus Smart with on 4-of-9 shooting 13 points.
With the bench providing little production with Evan Fournier (health and safety protocol) out, the Celtics' starters stole the show, especially with Tatum's second-half scoring. Adding 25 points alone in the final two quarters, Tatum emerged as the Celtics' best scoring option and delivered in the clutch and even hit the game-winner.
Mentioned before, his late-game heroics played an integral role in the Celtics' win, especially offsetting Damian Lillard's 11 points in the final six minutes of the game. With Jaylen Brown (24 points), Kemba Walker (21 points), and Robert Williams with 16 points, seven boards, four assists, and two blocks, Boston snuck out with a big win against one of the most talented teams in the West.
With two of the top shooters in the NBA in Lillard and C.J McCollum, Norman Powell's emergence, and some solid bench scoring led by Carmelo Anthony, the Blazers are a much better team than advertised-- especially after McCollum missed 25 games this season.
Winning on the road isn't easy, and after defeating the Blazers Tuesday, the Celtics felt good about themselves against a tough Western Conference team. The win also pushed the Celtics into fifth place in the East with a chance to jump to the fourth seed, which adds another reason to why beating Portland was the Game of the Week.
Stud of the Week: Jayson Tatum -
Building off his 53- point scoring outburst last week, Jayson Tatum picked up right where he left off this week in games against the Nuggets, Trail Blazers, Lakers, and Warriors. With splits of 27.9 points, 8.3 rebounds, 49% shooting, and 40% from 3-point range in his last 10 games, Tatum has been dominant late in the season--something Brad Stevens emphasized after his performance in Portland.

"Tatum's done that here for this stretch. This is about the time, number of games, where last year he started taking off and you can kind of see that in the last so many weeks," said coach Stevens in his postgame presser. "He's really in a rhythm of knowing what he wants to do on a given possession and where those opportunities are going to be coming from."

That translated to this week, where Tatum averaged 29.5 points on 51.2% from the field, 44% on 3's, 8.5 rebounds and 3.8 assists.
It all started in Denver, where Tatum's 28-point performance helped blow out the Nuggets on the road. Adding 10 rebounds in the win, Tatum finished with at least 10 rebounds in three-straight games-- falling just short of extending it to four games after hauling in nine rebounds in Portland.
In a complete team effort, Tatum once again led the Celtics against the Blazers, scoring 32 points-- his 14th 30-point game of the year. He also made key shots down the stretch, knocking down two clutch free-throws in the final minute to give Boston the lead, and topping it off with a dagger 3-pointer in traffic to hold off Portland.
Aside from his game against the Lakers (14 points, 6-of-14 shooting), Tatum's offensive dominance has been on full display, and he was the Player of the Week for the Celtics, who are now riding a six-game winning streak. Jaylen Brown could have easily been put in the discussion, especially after his 40-point performance against the Lakers, but Tatum's offensive heroics and scoring took the title this week.
Stinker of the Week: Celtics @ Los Angeles -
It's hard to imagine that your worst game in the past seven days featured a 27-point lead, but that doesn't tell the whole story, especially when you're ridding high after a 4-0 week. But the Celtics nearly coughed up what should have been a blowout win over the Lakers, to barely beating Los Angeles by eight at the Staples Center.
With seven minutes to play and Jaylen Brown cooking with 36 points, the Celtics began the fourth quarter on a 22-7 run and Stevens decided that Lakers had enough by pulling all his starters. Boston had an 113-86 advantage before their bench were out scored 24-2 in a span of four minutes and their near 30-point lead was cut to single digits, forcing Tatum, Brown and Smart to check back into the game with 1:50 left to stop the bleeding.
Brown scored four quick points to hit 40 for the third time this season and Smart knocked down a pair of free throws to ice the game. In the end the Lakers' second unit outscored the Celtics' bench 69-26, with rookie Payton Pritchard netting 15.
Did we mention that the Lakers were without LeBron James, Anthony Davis and Andre Drummond?
Dud of the Week: Celtics' Bench -
Without Evan Fournier (health and safety protocol) and Tristan Thompson starting in two games this past week for Robert Williams (knee), the Celtics' bench once again have proven to be the weak link despite a six-game win streak.
After the embarrassment against the Lakers, where even former Celtic Kendrick Perkins called out the second unit, it was clear that Danny Ainge had to do something.
Enter Jabari Parker. The seven year veteran forward free agent was signed Friday and was playing in his debut on Saturday in arguably one of the biggest wins of the season over the Warriors.
In the three games prior to Parker's arrival, the Celtics bench averaged 13.7 points per contest and against Golden State the bench scored 29 points with 11 of those coming from the former No. 2 pick in the 2014 draft on 5-of-6 shooting.
While Fournier and Robert Williams may be back this week, Parker and Pritchard will have the hold down the fort off the bench until then.
What to Look for This Week: vs. Bulls (4/19), Suns (4/22) and Nets (4/23) -
How will the Celtics play against the Elite?
The Celtics have had some good wins this season against some of the elite teams in the league, but there haven't been a whole lot. They'll face some big tests this week in games against the Suns (40-15, No. 2 seed West), and the Nets (38-18, No. 2 seed East).
The biggest question surrounding this team currently is how they'll fare against the best teams in the league and their winning streak will be on the line this week. Is the Celtics' current play a sign of the team turning a corner, or will some tougher competition expose that they're not up to par with the elite teams?
They've defeated the Nuggets twice this year already, and have some good wins against the Bucks and Clippers. However, they've already lost the season series to multiple teams in their own conference. They dropped all three games against the 76ers. They lost two games against the Nets this year -- including a Christmas Day blowout loss -- heading into this week's final matchup, and already fell to the Suns in February, 100-91.
If the Celtics want to prove they belong among the league's best, they'll need to be at the top of their game. With their young stars scoring at a high level, their defense improving, Evan Fournier returning and Jabari Parker's impact, the Celtics' outlook is much brighter than it was a few months ago.
After this week, the best teams they'll face are the Heat (twice), Trail Blazers, and Knicks. The rest of the schedule is rather easy (record wise), so facing the Nets and Suns will be their last taste of elite competition before the playoffs. Winning those games would provide the team with plenty of confidence and momentum going into the final 15 regular season games.
They've been winning the games they're supposed to win, but can they beat teams at the top of the standings in their respected conferences? That will be something we'll have to keep an eye on this week.
Ian Carrano
Follow @IC_Sports1
Joel Pavón
Follow @Joe1_CSP