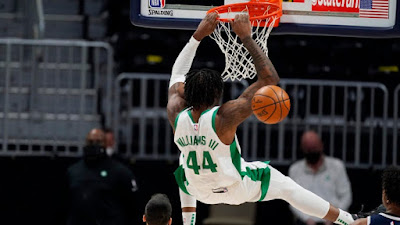 After being listed as questionable on Monday's injury report, Robert Williams has officially been downgraded to out tonight against the Oklahoma City Thunder with a sore left knee.
This will be the big man's seventh straight missed game since April 13th against the Portland Trial Blazers when he last played.

"I mean, I think he's getting better," Stevens said in his pregame presser. "So we hope that – again – he's back at some point soon, but just not quite ready today."

In the 10 games since Williams become a starter following Daniel Theis being moved prior to the NBA trade deadline, the Celtics were 8-2 -- while averaging 10.1 points, 9.1 rebounds, 3.4 assists, and two blocks per contest. Boston is currently 3-3 in his absence.
Williams has played in just 47 of the Celtics 61 total games this season with 11 reaming before the playoffs begin.
Kemba Walker is also out after injuring his left side on Sunday, as he left to be looked at but returned to play a total of 30 minutes. Jayson Tatum will also not play against the Thunder due to a left ankle impingement that's been apparently bothering him over the last few games. Both will sit out for now on the front end of a back-to-back before the Celtics host the Hornets once again on Wednesday night.