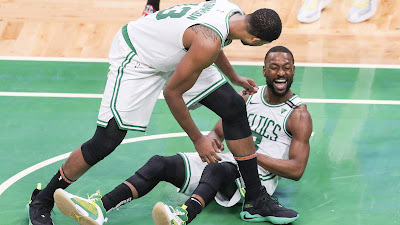 The Celtics six-game win streak came to an end, but Kemba Walker has shown signs of regaining his All-Star form this past week.
While Walker only played in one game and the C's finished 1-2 in their last three outings, their double-digit win over one of the best team in the league when it comes to the Phoenix Suns should serve a momentum builder.
With Walker continuing to hit his stride on both ends of the floor, the Celtics will need that as their current 32-28 record is the sixth best record in the East and they're hovering over the new Play-In Tournament territory with 12 games remaining.
Stud of the Week: Kemba Walker -
As arguably the Celtics' best player last week, Jayson Tatum took a step back over the past seven days, shooting 3-of-17 in both games against the Chicago Bulls and Suns. Struggling with consistency this season, Walker looked more like his old self in his only appearance this week, which was highlighted by a 32-point performance against Phoenix at home.
Shooting 11-of-17 from the field, Walker is the middle of his most efficient stretches this season. Looking confident with his shot, finishing at the basket with ease, and showcasing his explosive dribble moves, the 30 year-old seems to be healthy and comfortable in his role. To be fair, it is a small sample size, but heading into the playoffs Walker's recent play is encouraging for a team that could certainly use another consistent scorer to take some pressure off Tatum and Jaylen Brown.
Walker started the game on a hot streak against the Suns, knocking down all four of his first shot attempts for 11 points, and draining three 3-pointers in the first-quarter alone. The Celtics' scoring options were already limited with Brown out due to a shoulder injury, and Tatum's offensive struggles didn't help the team's cause. Luckily, Walker stepped up when they needed him, and delivered his second 30-point game of the season.
Making 64% of his shots, Walker was on fire all game and was Boston's best player against the second place Suns. Walker also made key plays on the defensive end, drawing three charges on Devin Booker forcing him to foul out, including a key offensive foul late in the fourth quarter--which brought up his total to 19 charges drawn this season-- second in the NBA.
Game of the Week: Phoenix @ Celtics -
With a 1-2 record this week, the Celtics' best game this week goes to their victory over the Suns at TD Garden. Walker's offense carried the Celtics, with Pritchard (10 points) and Marcus Smart (11 points) being the only other players scoring in double figures outside of Walker and Tatum (15 points), who couldn't catch a break shooting all night.
Making multiple highlight-reel plays with his ball handling, Walker didn't look slowed down by the knee injury that has derailed his explosiveness over the past few years. Resting on back-to-backs all season, Walker finally has looked more confident in his abilities of late, which was on full display against the Suns. Whether it was from deep or making contested shots inside, Walker has looked like the player that the Celtics believed worthy of a max-contract a couple of years ago.
There wasn't a whole lot to be excited about with the Celtics' play in this one, but they made the important stops down the stretch to secure the victory. They also kept Booker in check aside from his foul trouble, holding him to only 15 points on 6-of-13 shooting and forcing him to commit five turnovers. The Celtics held sizable leads throughout, but costly turnovers allowed the Suns to make a run late in the third quarter into the fourth. Aside from the turnovers, the Celtics' defense had some strong stretches and responded when they needed to.
Boston has struggled against the elite teams this year, so beating a top team in the Suns was definitely a good sign for the Celtics, who were missing two starters.
Dud of the Week: Romeo Langford -
Langford started two of the three games this past week putting up averages of 1.3 points, on 15% shooting and 0-of-4 from deep, 2.6 rebounds and 1.0 assists in 24 minutes per contest, while raking up seven total fouls.
His defense has been subpar at best, while his offense has pretty much been non-existent and if you're not making an impact on either end of the floor there is no reason to give Langford any playing time, let alone starts.
With the Celtics needing as many wins as possible down the stretch to keep up in a tight playoff race in the East, the play of Langford has hurt them, especially against the Nets (-27).
Stinker of the Week: Celtics @ Brooklyn -
Granted the Celtics were shorthanded (Jaylen Brown, Robert Williams or Walker), so were the mighty Brooklyn Nets, who were without Kevin Durant and James Harden but they didn't capitalize -- losing 109-104 at Barclays Center.
On a night where Kyrie Irving shot 4-of-19 from the field and 0-of-6 from behind the arc, the former Celtics point guard handed out 11 assists and Joe Harris and Jeff Green combined for 39 points to lead the Nets to their 40th win of the season.
Despite 38 points from Tatum and 22 points from Payton Pritchard off the bench, their 17-point rally fell well short in the final minutes of the fourth quarter. Plus, it didn't help that 21 turnovers committed by Boston were converted into 32 fast break points.

"Any time you turn the ball over a lot and you give a team like Brooklyn opportunities to get out in transition, get easy shots and stuff like that, it's going to be tough to win games," Pritchard said during his postgame presser.

The return of Evan Fournier after missing nine straight games due to being in health and safety protocol didn't help matters much as he finished with two points, five assists and two rebounds in 22 minutes of action.
What to look for This Week: vs Hornets (4/25), Thunder (4/27), Hornets (4/28), Spurs (4/30) -
Will Kemba Walker Find some Consistency?
After a week of some tough matchups, the Celtics have a relatively easy schedule this week playing the Hornets twice and matching up against a depleted Thunder team. With another back-to-back on the schedule, Walker will likely only play in three of their four scheduled games. The biggest storyline to watch this upcoming week will be if he can continue his recent success. Walker has had flashes of the player he once was, but has never been able to put together a long stretch of consistency.
The Celtics are thin especially with bench scoring, so they'll need more 20-plus point performances from him going forward. Walker has looked much better than he did earlier in the season and looks close to being fully healthy. Is this just another case of having a few strong performances and returning to being an inefficient scoring option, or has he really turned a corner? With the playoffs approaching, we'll get the answer to that question in this week's set of matchups.
Will Evan Fournier Bounce-Back after Battle with COVID?
Missing the Celtics' nearly three weeks of basketball, Fournier returned to the lineup on Friday night, but looked out of his element, shooting 0-7 from the field in 22 minutes. It was expected Fournier would be rusty, but post-COVID the biggest concern with him is whether he'll be able to bounce back and find his shooting touch. Prior to contracting the virus, Fournier was starting to find his groove with 23 and 17- point performances in the last two games before going into protocol.
Considering Tatum's struggles earlier this year returning from the league's health and safety protocols, Fournier will likely need a little time to regain his confidence and integrate himself back into the offense. With the Celtics having an obvious need for bench scoring, will Fournier help improve the team in that area, or will he look like he did against the Nets and in his debut?
He’ll need some time to regain his conditioning and find his shooting form, but this week's games, especially against some weaker competition, could give us an indication of whether he'll be able to fully be re-acclimated with his new teammates -- after only playing in five of the last 16 games since being traded to Boston.
Ian Carrano
Follow @IC_Sports1