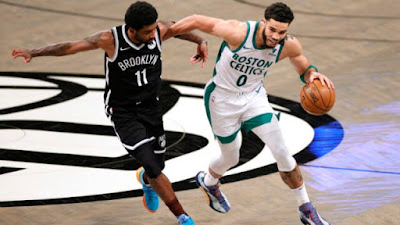 The shorthanded Celtics came into the Barclays Center winning seven of their last nine games before getting beat by the Brooklyn Nets 109-104 Friday night.
Jayson Tatum bounced back offensively after two straight 3-of-17 shooting performances against the Chicago Bulls on Monday and the Phoenix Suns Thursday respectively. The All-Star forward scored 25 of his 38 points in the first half to finish 14-of-27 from the field and 6-of-12 from deep and grabbed a team-high 10 rebounds.
Rookie Payton Pritchard went 6-of-7 from behind the arc to score 22 points off the bench and Marcus Smart added 19 points for the Celtics, who were without Jaylen Brown (shoulder), Kemba Walker (rest) and Robert Williams (knee).
Kyrie Irving struggled, shooting 4-of-19 from the floor and 0-of-6 from 3-point range after scoring a combined 77 points in the Nets' previous two victories over his former team. The ex-Celtic point guard nearly recorded a triple-double -- 15 points, 11 assists and nine rebounds -- as he found other ways to help his teammates out and be effective.
Joe Harris scored 20 points, Jeff Green had 19 and Brue Brown chipped in 15 off the bench for the Nets who completed the season series sweep over Boston to taken over the first seed in the East at 40-20.
The Celtics made it difficult on themselves to regain a lead, as they committing 19 turnovers that were converted into 32 fast break points for Brooklyn.

"Any time you turn the ball over a lot and you give a team like Brooklyn opportunities to get out in transition, get easy shots and stuff like that, it's going to be tough to win games," Pritchard said during his postgame presser.

Despite the Nets being without Kevin Durant (bruised thigh) and James Harden (hamstring), their balanced scoring was too much to overcome.
Still, the Celtics cut a 17-point deficit down to three (98-95) with 3:32 left to play after back-to-back made 3's by Pritchard and Tatum. But the Nets responded with a Harris 3-ball and a Green dunk off an assist from Irving to put Brooklyn back up eight.
The closest Boston would get in the final seconds was 107-104 following a deep 27-foot 3-point jumper by Pritchard before Irving calmly sank a pair of free throws to ice the win.
After a 25-21 Celtics' lead to end the first quarter, the Nets outscored Boston 39-26 in the second period and took a 60-51 advantage into intermission, while Tatum ended the half with a made 3 at the buzzer and was the only C's player in double-digit scoring.
Brooklyn used a 10-0 run to end the third period to take a 86-70 lead into the final frame before Boston's failed rally attempt.
The Celtics (32-28) have sole possession of the sixth best record in the conference and are a full game behind the Atlanta Hawks (fifth) and New York Knicks (fourth), who both are 33-27. Boston will head to Charlotte to face the 29-30 Hornets (eighth) Sunday afternoon, as tip-off is at 1 PM EST on ESPN.

Celtics shot 40.4% from the field and 17-of-42 (40.5%) from 3, while the Nets made 43% from the floor and 34.2% from beyond the arc. Boston out-rebounded Brooklyn 54-47, but were outscored 48-38 in the paint and lost the assists battle 26-21.
Evan Fournier made his return to the lineup after missing nine straight games due to being in health and safety protocol. The veteran guard was 0-of-7 on shots attempted, but finished with five assists and two rebounds in 22 minutes of action.
Joel Pavón
Follow @Joe1_CSP