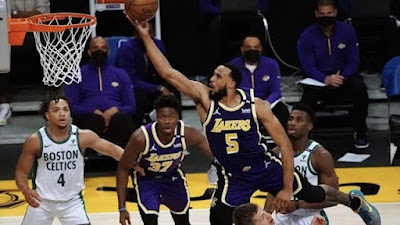 The Celtics barely escaped the Staples Center with a 121-113 win over the Los Angeles Lakers Thursday night after blowing most of their 27-point lead.
Boston, who never trailed once throughout the game, had 113-86 advantage with 7:01 left to play and Jaylen Brown was cooking with 36 points scored before Brad Stevens pulled his starters.
Then it came apart at the seams for the Celtics as the Lakers' bench used a 21-2 run to get within 115-107 with 1:50 remaining, forcing Stevens bring Marcus Smart, Jaylen Brown and Jaylen Brown back into the game to stop the bleeding.
Brown scored a quick four points to increase his total points to 40 for the third time this year and the Celtics made it out of Los Angeles with their 30th win of the season, plus a five-game win streak.
Former C's big man Kendrick Perkins called out the Celtics second unit -- who were outscored by L.A's bench 69-26 -- during NBC Sports Boston's postgame show.

"When you come into the game, you're still fighting for your livelihood. We're talking about guys who are still on rookie contracts. When you're on a rookie contract, every minute is valuable. Every possession is valuable," Perkins said.

"You don't know who's watching. It's not just Brad Stevens or Danny Ainge and the Celtics organization, but they have other scouts from other teams who are watching. Not only watching to scout the Celtics and send in a report sheet, but they're watching to see other talent, who's coming up for free agency so they can keep their on them in case the Celtics don't want them. So you're always auditioning for a job in the NBA, especially when you're a third string-type of player."

Without Evan Fournier (health and safety protocol), the Celtics' bench had trouble scoring other than rookie Payton Pritchard, who netted 15 points on 5-of-11 shots. Boston's second unit managed to go 10-of-28 from the field and 5-of-13 from deep, which included 1-of-5 made buckets during that Lakers' rally.
While Tristan Thompson started in place for Robert Williams (sore left knee), this should serve as a lesson after nearly coughing up a sure win to the end of the Lakers' bench. As the playoffs are around the corner, the Celtics need to be able to give their All-Stars a breather before they have to play heavy minutes come the postseason.
Boston's schedule favors them in the final 16 games of the regular season as they look to improve their current fifth seed record of 30-26.
Joel Pavón
Follow @Joe1_CSP