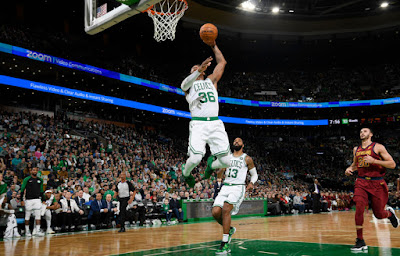 Brad Stevens' change to the starting lineup was once again a success.

Sure, they were without Al Horford (Aron Baynes got the nod) and of course, it was against the Cavaliers -- a team that sits at the bottom of the Eastern Conference standings -- but Boston's offense is sizzling right now.

After reaching a season-high 124 points in Monday's win over the Pelicans, the Celtics topped it to the tune of a 128-95 beating against Cleveland at TD Garden Friday.

Seven Celtics players scored in double figures, including all five starters. Brad Stevens turned to his two Marcus' once again, starting Marcus Smart and Marcus Morris, and it paid dividends.

They combined for 27 points on 9-of-16 attempts. Smart (12 points) finished with a game-high 7 assists, a plus-33 game rating to go with his three steals.

The additions of Smart and Morris into the starting unit is now 2-0 and has set season-highs in offensive production as the Celtics are now averaging 126 points over their last two contests.


"The unit we have out there right now has built that continuity as well as leadership amongst us," Kyrie Irving said. "Communication, effort, everything is built on the guys we have out there with Marcus Morris bringing some grit, Marcus Smart doing his thing, Al not being here in the lineup but Baynes being in there, we have our other young guys filling in and playing with that same pace we're playing with. It makes our jobs a lot easier, playing at a high level when we're all doing it. We need everyone to do it."

Irving finished with a game-high 29 points in 27 minutes before he looked on from the bench throughout the entire fourth quarter. It was an inspiring performance from the team's scoring leader, who shot 11-of-15 from the floor, including 5-of-7 from deep.

The offense overall was incredible. They shot 53.3 percent, drained 17-of-31 from behind the arc and at one point led by 33 points.


"Nobody's going to play perfect but I think that our approach was good," Stevens said after the game. "I think our approach the last few games have been good, yeah. Just have to keep it going, just have to keep doing it. 22 games in, just like you can't get too low when things aren't going your way, you win a couple, you better just stay the course because you've got a tough one tomorrow."

The Celtics will play their second leg of a back-to-back in Minnesota Saturday night against the Timberwolves. Horford is expected to return to the lineup as Boston will look to make it three wins in a row.

Celtics: Starting unit combined for 79 points on 58 percent, including 10-of-19 3-pointers. It's also the eighth time this season they've held a team to under 100 points -- they're second in the NBA in that defensive statistical category.