Jaylen Brown (sore back) will not play against the Pelicans 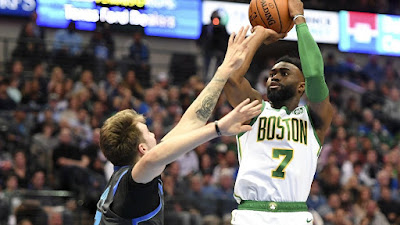 The Celtics have been through some trials and tribulations after the first 20 games of the regular season, as they find themselves with a 10-10 record. Their 113-104 loss to the Mavericks on Saturday night not only regulated them back to .500 again, but they might also be without a starter going forward.

Despite the Celtics staying relatively healthy so far this season, Jaylen Brown will miss tonight's matchup against the New Orleans Pelicans with a sore lower back. The third year swingman injured himself late in the fourth quarter of Saturday night's loss in Dallas.

Luckily for Brown, who took an awkward fall trying to make a block on Luka Doncic, he has avoided serious injury, according to the Celtics.


Brad Stevens will have to tweak his starting lineup once again after having Gordon Hayward come off the bench as of late.

The Celtics will return home and have four days off following Monday night's tilt against the Pelicans, who also happen to be 10-10 on the season.