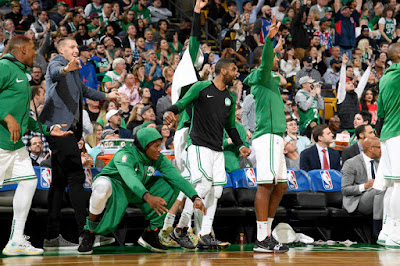 The Bucks sent a message to the Celtics Thursday night at TD Garden.

They entered as the only undefeated team in the league (7-0) and while they left the building with their first loss of the young season, the Bucks left knowing that they can certainly compete against a healthy Celtics team. After beating top Eastern Conference teams like the Raptors and Sixers prior to Thursday's contest, the Bucks couldn't have felt more confident to take down the shorthanded team that sent them packing after a Game 7 blowout loss in the opening round of last year's playoffs.

Giannis Antetokounmpo, who sat out against the Raptors Monday night due to the NBA's concussion protocol, made a surprising recovery just in time for Thursday's marquee matchup against a full healthy Celtics team. Boston made franchise history from behind the arc, draining 24 3-pointers while shooting at a 43.6 percent clip but it almost wasn't enough.

Boston is in the middle of the pack in 3-pointers made per game but by the end of the night they looked better than the champion Warriors. Still, the Bucks hung around.

Antetokounmpo proved why he is the most dominant player in the conference, yielding his team a two-point game and nearly erasing a 15-point Celtics lead. The Greek Freak tallied 14 of his 33 points in the fourth quarter as the Bucks almost survived the Celtics' greatest shooting performance.

It's a telling sign for Boston, a team still trying to find its identity but still almost choked away a 117-113 win. Six players in double figures, including Kyrie Irving (28 points), Gordon Hayward and Al Horford (18 points) -- the trio combined for 64 points, more than half of Boston's point total and still almost lost because the best player on the floor took matters into his own hands down the stretch.

Antetokounmpo's growth up until this point is reminiscent of another young up-and-comer who challenged a previous championship-contending Celtics team one decade ago -- LeBron James. From an offensive standpoint, he couldn't be stopped throughout the final frame and was a bit modest in his attempts (13-of-22) but that will probably not be the case the next time these two teams collide.

His approach is in finishing strong at rim, draining mid-range jump shots and leading the Bucks' fast-break is what prevented the Celtics from stopping the bleeding. Milwaukee was essentially one Eric Bledsoe's missed free-throw away from forcing overtime and who knows what would have happened then.