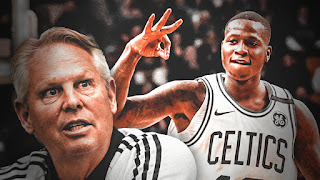 Terry Rozier's slow start to the regular season has led to rumors surrounding the Celtics that Kyrie Irving's backup could be on the move.

After one report by The Athletic's Shams Charania revealed up to seven NBA teams are interested in Rozier's services at point guard, another by The Ringer's Bill Simmons suggested that Rozier isn't satisfied with his playing time this year. However, Celtics president of basketball operations Danny Ainge vehemently denied these claims when he was asked about it during his weekly appearance on  98.5 the Sports Hub's Toucher and Rich.

Hearing that Rozier is unhappy with his role was news to Ainge.


"I talk to Terry quite a bit and I haven't heard any of those types of things. So I don't know how reliable any of the sources or rumors are," Ainge said. "Terry hasn't shared any of those with me, and I think he would if was feeling that way. Terry knew going in this year what his situation, what his role was going to be, and he was as excited and enthusiastic as anybody on our team for the upcoming season. I know for sure that Terry would love to be playing more minutes but there's a lot of guys on the team that would love to be playing more minutes." [NBC Sports]

Prior to the 2018-19 campaign, it was well-documented that Ainge and Rozier have a unique relationship. The Celtics president of basketball operations took a chance on Rozier with the 16th pick in the first round of the 2015 NBA Draft, while most experts projected him as an early-to-mid second round pick at best.


"I feel like I have this relationship with Terry where he would come to me and talk to me or [coach] Brad [Stevens] if he was really frustrated about his situation," Ainge explained. "And none of that has happened."


Photo used is courtesy of Clutch Points
Posted by Josue Pavon at 11:36 AM
Email ThisBlogThis!Share to TwitterShare to FacebookShare to Pinterest